Olivier Jacques has joined APsystems as Senior Vice President and Managing Director, Europe, Middle East and Africa. He is based in the APsystems branch in Lyon, France. The company also maintains a European office in Netherlands. 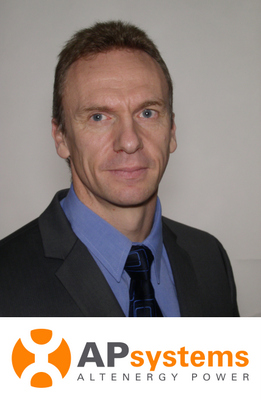 Jacques brings more than 20 years of experience in construction, industrial and high-tech industries. Prior to joining APsystems, he served as Managing Director EMEA for Enphase Energy. There, he developed the microinverter market in Europe from scratch, achieving leading share positions in key European solar regions.

“New global market opportunities open up to APsystems with the addition of Olivier Jacques to our team,” said Andrew Lonseth, APsystems president, USA operations. “His solar industry leadership in Europe, Middle East and Africa is outstanding, and enhances our position as a worldwide leader in renewable energy technologies.”

“I am very excited to join APsystems in such a key development phase globally,” Olivier said. “The company is increasing its presence in Europe, the Middle East and Africa, and I am absolutely convinced that APsystems’ portfolio strategy will bring outstanding value to solar professionals in these regions, especially given the current energy management market trends dynamic.”

Jacques previously served as Managing Director for several international companies including Norgren (IMI group), a leading industrial automation and fluid control company, where he spurred growth despite an economic recession.

Since its founding in Silicon Valley in 2009, APsystems has become an industry leader through innovative solar products including dual-module microinverters and the first true 3-phase, four-module unit.