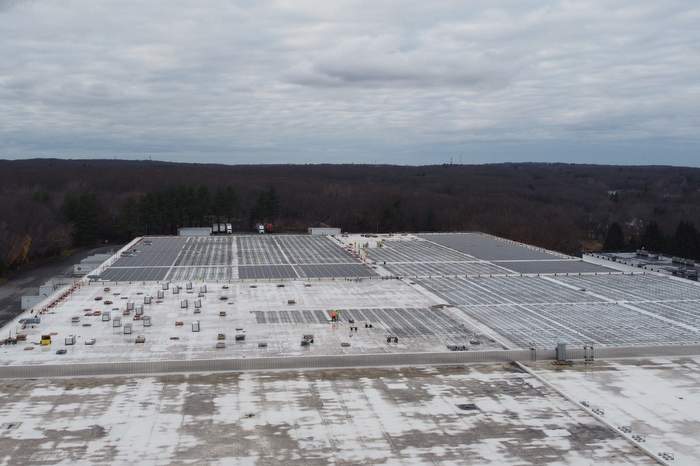 NuGen Capital Management, LLC (NuGen) starts construction of a 6.76 MWdc rooftop solar power system in the company’s home state of Rhode Island. The Briggs Solar project, comprised of over 16,000 solar panels, is being installed by AUI Partners on a 560,000 square foot warehouse in East Greenwich, Rhode Island. Full commercial operation of the project is expected in early 2021. The project will generate over 7,800,000 kWh annually.

“Over the past 15 years, AUI has worked on more than 3 GW of renewable energy projects across the United States, and Briggs is by far our largest rooftop installation, said Mario Carbone, Partner with AUI Partners, LLC. “We are now in full operations mode, and look forward to successfully delivering the project safely, on schedule, and under budget.”

The Town of Bristol, the Town of Barrington and the Barrington School District are committed to buy the power generated from the system through a long-term power purchase contract. The system should produce approximately 195,681,096 kWh over the lifetime of the contract period.

“Bristol is looking forward to the completion of the Briggs project which will help the Town continue its commitment to energy saving and renewable energy initiatives,” said Bristol Town Administrator Steven Contente.

This installation supports the State of Rhode Island’s accelerated clean energy initiative and Governor Gina Raimondo’s Executive Order 20-01 outlining the Governor’s goal for Rhode Island to be 100 percent powered by renewable energy by 2030.

“We are glad to be working with such strong partners in both AUI Partners and IBEW Local Union 99 to build the largest single rooftop solar project to date in Rhode Island,” said Aaron Rust, NuGen’s Director of Asset Management. David Milner, NuGen CEO, added, “The Briggs Solar project is NuGen’s largest solar investment in our home State of Rhode Island and we look forward to many more.”