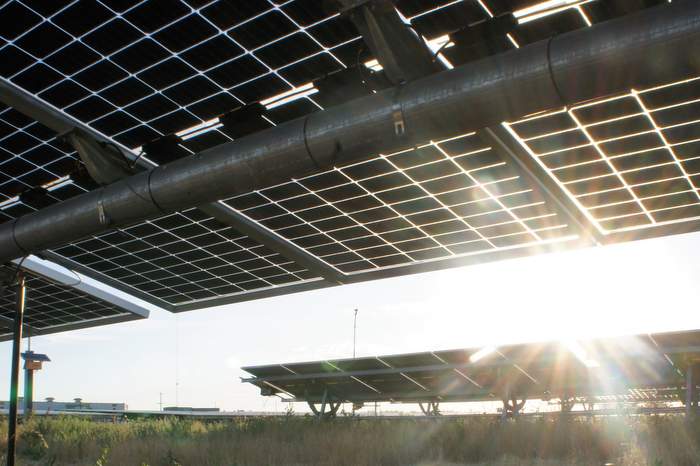 Improving the electricity yield in photovoltaic solar energy long has been a game of incremental additions of new technology. Over the past few years, bifacial panel adoption has been tested at a utility scale, and designs have been refined to the point that a high single-digit gain from a single-axis tracker + bifacial array is bankable. What’s now becoming clear is that using dual-axis tracker technology in place of a single-axis design can yield another 20% gain, albeit only at commercial-scale installations.

However, a third incremental technology gain — engineered reflective albedo — also is now being tested on single-mast dual-axis arrays, with the promise of yet another 10% gain or more, which permits far more solar projects to pencil out a favorable ROI, especially on sloped, irregular or confined land footprints.

The primary factor in bifacial panel performance is albedo, or the ratio of ground-reflected light compared with direct sunlight, which is captured by the back side of a bifacial panel. Natural albedo ranges from around 30% with a grass surface, to nearly 100% with snow. Engineered albedo from reflective surfaces of paint, white rock, and mirrored plastic or polished metal, with the latter coming close to the albedo value of snow with the bonus of year-round availability.

The bifacial boost from single-axis tracker arrays has been studied by several of the national renewable energy labs, as well as by private sector engineering firms. For example, Array Technology found in a New Mexico field test with a national research partner that bifacial gains were in the 5%-6% gain range for modules located in the interior of a utility-scale array. The rest of the results showed that modules rated with higher bifaciality factors yielded 7%, according to Jon Sharp, the VP of Array’s program management office.

Similarly, Nextracker’s NX Horizon has been found to produce a high single-digit to low double-digit gain from bifacial panels. “Overall, Nextracker is seeing mono-PERC bifacial gains of 5% to 7% under low-albedo conditions (≈20%) and 10% to 12% under high-albedo conditions (≈50%),” the company says. “These results from its Center for Solar Excellence are on par with those measured by PVEL (PV Evolution Labs) and NREL,” the Fremont, CA-based company adds.

Sandia Labs reported in mid-2020 that dual-axis trackers provide substantially higher yield gains during winter months when snow reflects light to bifacial panels. “Two years of empirical data from experimental systems in Vermont support this assertion, demonstrating that bifacial modules on a dual-axis tracker produced 14% more electricity in a year than their monofacial counterparts, and as much as 40% more during the peak winter months,” writes Joshua Stein, the lead investigator for Sandia.

“These bifacial gains are in addition to the estimated 35%-40% percent energy gains of a dual-axis tracker relative to a fixed-tilt system,” Stein reported. His experiments involved Williston, VT-based AllEarth Renewables dual-axis trackers, which support a 24-panel table.

Engineered albedo has widely been found to increase the bifacial boost. Engineering ground surfaces to enhance albedo has been studied for on a host of materials, ranging from white gravel to white vinyl roofing to mirrored plastic to polished metal.

For example, a test of Alion Energy’s concrete rail-based single-axis tracker showed elevated yields with albedo enhanced by white paint. PVEL evaluated the performance of bifacial modules mounted on Alion single-axis trackers in a year-long outdoor study. “A five-minute average bifacial gain of 8% was realized on a low-albedo concrete foundation in February 2020, which increased to 11% in March 2020 after the foundation was painted white,” PVEL reported.

Similarly, Gamechange Solar in January rolled out its BifacialReflector, a patent-pending design paired with its Solar Genius Tracker and bifacial modules. The technology is a 95% albedo yielded by a solid self-cleaning material not yet identified. The design can boost the gain by up to an estimated total of 15%-20% when using bifacial modules, the company says.

Another reflective surface being tested to boost yield with bifacial panels is water: Taiwan-based Big Sun claimed in 2018 that its single-axis tracker picks up a 20% to 30% gain. “By installing our iPV Tracker over a water surface using bifacial modules, the increase in yields achieved can reach 60% over fixed tilt systems utilizing monofacial modules,” the company said.

Terra Pave, a reflective, albedo-boosting soil binder aimed at bifacial solar sites, recently passed testing from Sandia National Laboratories in regards to heavy metal contaminants, organic contaminants and water pollution and its comparison to the results with those for AEP (Asphalt Emulsion Product). Terra Pave products are liquid soil stabilizers that permanently bind and transform the ground into a pavement-like layer. Terra Pave Top-Seal is engineered to achieve the albedo of snow – for use with bifacial solar panels. It was named a finalist in the AMERICAN-MADE SOLAR PRIZE competition from NREL this year. Terra Pave is exclusively available via Beckett Solar Energy.

Stacking the boosts from dual axes and from engineered albedo provides the highest overall yield to date.

One dual-axis + bifacial system provider, Point Load Power, claims to have found test results of a 70% bifacial boost on a commercial white vinyl roof with its PV Booster tracker, in comparison to a fixed-tilt monofacial array. Limits to the system include the distance from the panels to the rooftop, where wind lift is a controlling factor.

More recently Stockton, Calif.-based Mechatron Solar has begun to test a new metallic reflective surface that is mounted directly beneath its dual-axis tracker table, which supports 90 panels. This monolithic structure enables the optimization of distance between the reflective surface and the panels.

The Mechatron enhanced albedo design is currently being testing on an existing California customer array and preliminary data for public review is expected this spring. “The bottom line will be a performance-guaranteed 50%-plus gain using our technology and bifacial panels, compared with common fixed-tilt arrays and monofacial panels. Take that to the bank,” says Fakukakis.

Is the Sky the Limit?

How far can solar go with cost-effective bifacial gains? Only time will tell. “Gains of 20% to 30% may well be achievable in highly optimized systems with ideal environmental conditions,” opines Jenya Meydbray, CEO of PVEL. “However, certain system optimization techniques, such as the use of specialized high-albedo ground cover, can increase system-level build costs and ongoing O&M expenses. The challenge for the industry is to identify the most cost-effective system design optimization tactics.”