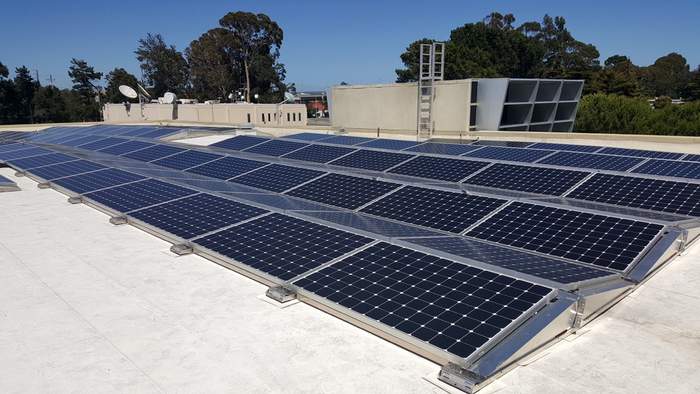 A new 168-kilowatt solar energy system is now operational in the City of Brisbane, Calif., thanks to Sunterra Solar. The SunPower rooftop PV system was installed on Brisbane’s City Hall as part of the City’s comprehensive sustainability and energy efficiency program.

In its first six months of operation, the city’s solar energy system has outperformed expected estimates, producing 166,900 kilowatt hours (kWh) of clean power to date. On an annual basis, the system is expected to offset nearly all of the electricity used by the City’s administrative offices.

The city sought bidders for its solar project through a competitive process that took a novel approach, asking bidders not just to provide pricing but to estimate annual system production and degradation rates over a 20-year period. Sunterra was selected due to its ability to demonstrate higher performance of SunPower systems. SunPower Maxeon panels produce up to 55 percent more energy than conventional solar panels in the same roof space over 25 years. SunPower also has the industry’s lowest degradation rates, a measure of a solar panel’s reliability over time.

“Although we are a relatively small city of 4,700 people, we take sustainability very seriously,” said Randy Breault, Director of Public Works, City of Brisbane. “Sunterra did a great job of understanding that our intent in the bid process was to maximize energy production, and they were awarded the project because they had the highest production-to-bid cost ratio. The team has been a pleasure to work with throughout the process.”

“Brisbane is a great example of what local communities can do to advance sustainability and take action on climate change while also being fiscally responsible,” said Chris Bunas, President/CEO of Sunterra Solar Inc.

Located just south of San Francisco, Brisbane has demonstrated its commitment to sustainability by adopting a Climate Action Plan in 2015 and implementing several innovative strategies including rainwater catchment, solar thermal heating for the community pool, and a city-wide commercial building energy-efficiency program. For its efforts, Brisbane became the first city in California to win the Institute for Local Government’s Gold-Level Beacon Award in 2015 as well as subsequent Platinum Spotlight Awards for its holistic approach to addressing climate change.