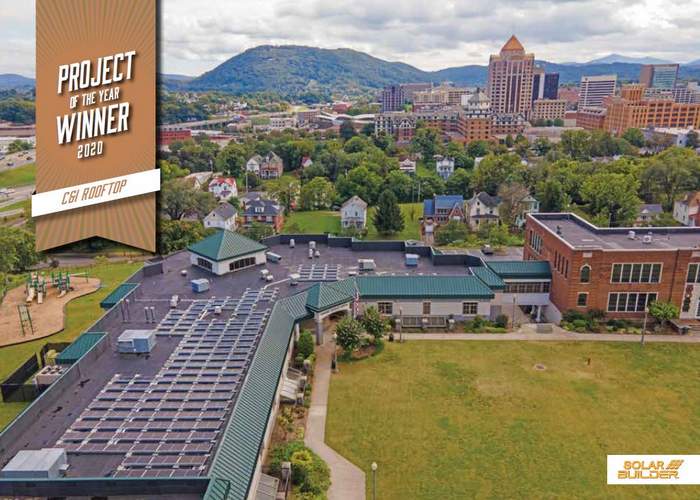 Nonprofits and places of worship are in that no man’s land when it comes to solar — operations that would benefit immensely from the savings of renewable energy but with no easy path to financing. The 2020 C&I Rooftop Project of the Year demonstrates a way forward for nonprofit, religious organizations nationwide to collaborate and leverage their real estate holdings in scale to find that investor buy-in.

Mission Energy teamed with the Catholic Diocese of Richmond Virginia to create a pathway to install solar across any of its 143 parishes and 26 schools via power purchase agreements (PPAs). The first six projects, ranging in size from 61 kW to 316 kW, were developed simultaneously and funded by a single investor as a portfolio, which all officially came online this year.

Is it a cheat to have this bundle win an award as opposed to a single standout project? We obviously do not think so, and in fact that’s what makes this project award-worthy; none of these single projects is even possible without the whole. That innovation to get solar into a grossly underserved segment is worth celebrating.

“Going through COVID has been difficult. Some parishes are laying off people,” says Charles Mikell, director of real estate for the Catholic Diocese of Richmond. “If you’re talking saving $5,000 or $15,000 a year, that’s a part-time person or housekeeping staff. Now they see with solar they can maybe get back to normal and find another income stream for the parish.”

The first piece was buy-in of the senior church leadership. Through the Catholic Energies program, a service of the Catholic Climate Covenant, Mission Energy empowered individual parishes, schools and their pastoral headquarters to make their own fully informed decisions whether or not solar would be a good fit. By focusing first on sound economic modeling, Mission Energy educated each location on the potential economic and environmental benefits solar could offer.

From the Bishop on down, the leadership team was in.

“I have to go be honest, I go back to the late ‘80s when everyone was talking about solar, and it never panned out. So I actually needed to be convinced and see that it actually worked and paid for itself and was beneficial to the parishes,” Mikell says. “Once I was convinced there, now I just keep pushing it and pushing, telling people how great Catholic Energies is. For most of these parishes it is zero money out of their pocket.”

The diocese leadership vetted and approved the PPA legal terms so that the parishes didn’t need to spend their own money on legal fees. The PPAs are then signed by each parish or school, but the diocese is guaranteeing them, using their balance sheet as part of the underwriting. That is another positive wrinkle for the second puzzle piece: finding an investor.

“Getting a one-off 70-kW project for a church is a heavy lift, so now that we are seeing the support by the parishes, and we’re seeing the support by the diocese, we said let’s try to make this a win-win and aggregate a collective bundle,” says Page Gravely, president at Mission Energy. “In C&I, scale is a good thing. Some investors are interested in certain regions, some in certain segments.”

New York-based investor Captona saw the vision. They liked Virginia because of the Virginia Clean Economy Act (VCEA). They liked the Mission Energy program, and their consistent methodology. They just needed to get the bundle to the right size.

“Once we got the numbers down for these six projects, they were satisfied with that volume of capital, which is not much in the grand scheme of things, but it was big enough where it met their minimum,” Gravely notes. “So now we’re set up.”

The third cool piece is the savings at the EPC level: “We worked with local Virginia EPCs, and they were excited about it and the opportunity to shave their numbers by buying in a little bit more bulk because of the portfolio package,” Gravely says.

Don’t gloss over the fourth piece of the puzzle mentioned above: Virginia has become a pro-solar state, passing the VCEA. It established a mandatory renewable energy program with provisions for rooftop solar power, expanded net metering provisions, protections for low-income families and increased project size limits for commercial and residential solar energy projects. It paved the way for these win-win PPAs.

With this project as a shining model, the Catholic Diocese of Richmond Virginia demonstrates its commitment to solar and is now targeting as much as 70 percent of their state-wide portfolio for rooftop solar within the next three years. Gravely says they’re deep into working on the next batch of 12 to 20 parishes for the next placement of capital.

“They all have to stand independently on their economic merits, but our job is to enable this confluence of economic benefit and this conviction of the care of creation,” Gravely says. “Sure, they want to save money but these parishes want to show they’re walking the walk and showing the next generation that yes we do care about this.”