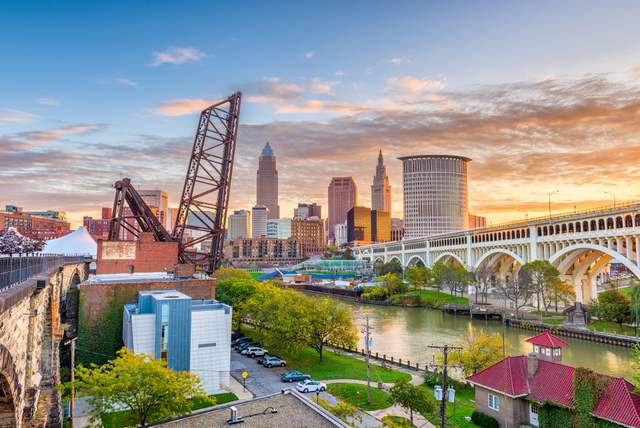 Time to stuff all of your “Mistake by the Lake” jokes, people. Just before Solar Power International, out of nowhere, the City of Cleveland became the first municipality in Ohio to commit to powering itself with 100 percent clean and renewable electricity.

At Mayor Frank Jackson’s 10th Annual Sustainable Cleveland Summit, the city’s Office of Sustainability released the 2018 Climate Action Plan, which contains a goal of “100 percent of electricity demand from clean, renewable energy by 2050.”

At the summit, Mayor Jackson presented the city’s new Climate Action Plan while gathering with community leaders to discuss the city’s sustainability future. In committing to move away from dirty fossil fuels towards an equitable energy system powered by renewable sources like wind and solar, city leaders acknowledged the importance of continuing to work with residents, businesses, and community groups to establish what Mayor Jackson calls “a green city on a blue lake.”

“This 100 percent commitment is an important springboard for building an energy economy in Cleveland that works for everyone,’” said Jocelyn Travis, campaign coordinator for the Cleveland Ready for 100 campaign. “The Ready for 100 campaign looks forward to continuing to work with the City to ensure a transition to 100 percent renewable energy can benefit everyone in our city. The need for clean air, new family-sustaining jobs, and affordable energy bills has never been greater. Cleveland should lead the state and the Midwest in accelerating a just and equitable transition. We look forward to continuing to partner with the City to realize our collective vision.”

“We congratulate the City of Cleveland in establishing a goal of powering our communities with 100 percent renewable electricity,” said Yvonka Hall, Executive Director of Northeast Ohio Black Health Coalition. “By making this commitment, the city is also committing to improving public health, with increased energy access and prosperity for all. This is just the beginning of a more sustainable future for all Clevelanders.”

“This is an exciting milestone in the effort to transition Ohio communities to 100 percent renewable energy. My congratulations to the team led by Jocelyn Travis and the individuals and community groups in Cleveland who made this a reality,” said Guy Marentette, Chapter Chair of the Ohio Sierra Club. “Ohio is already a leader across the Midwest for clean energy jobs; as utilities and more cities and towns adopt renewable solutions, we have the opportunity to develop an energy economy that is equitable and just, all while cleaning our air and water.”

The Climate Action Plan was informed by a 90-person Climate Action Advisory Committee consisting of leaders from community groups, including Cleveland Ready for 100. This helped the Office of Sustainability focus on “equity-driven sustainability and climate action.”

In addition to establishing a 100 percent goal, the Climate Action Plan also sets other important objectives to build a healthier, safer, more equitable Cleveland, including: