Most solar installations require the grid to maintain a consistent voltage and to provide surge power when large appliances start up. When the grid is not present, most systems automatically stop producing energy. Maxout Renewables is addressing the challenging issue of solar power backup with a new system called the Evergrid, a stand-alone appliance that stands in for the grid during a power outage.

“The problem with residential solar energy right now is that very few rooftop installations can produce power when the grid goes down,” says Dr. Eric Cummings, President of Maxout Renewables. “Battery backup systems can do the job—but at a cost of $10,000–30,000. That’s simply more than most homeowners can afford. So, they go without. And when the grid goes down, all of that rooftop solar capacity goes dark as well.”

What’s it do? The Evergrid maintains the voltage waveform, allowing a solar installation to continue to generate power when the grid is down. It also mechanically stores energy to handle power surge requirements when large appliances start up. At a target cost of $1,000, Evergrid will provide an affordable solution for most homeowners, whether they have existing solar installations or are considering new ones.

“In a power outage the first few watts of power are the most important,” said Cummings. “Being able to charge cell phones and laptops, and to continue to run a refrigerator and air conditioner—these are so critical to a home, especially right now with so many families working and studying in the house. We are developing the Evergrid to keep daily life functioning, regardless of grid conditions.”

Battery help. Yes, the Evergrid also benefits systems that have battery backup. By providing the surge power, the Evergrid allows a battery system to be sized for a home’s continuous load, rather than for the maximum surge load. This reduction in system size translates to a significant reduction in upfront installation costs. The Evergrid’s surge power also protects batteries from overload events, a common cause of service calls with backup battery systems. 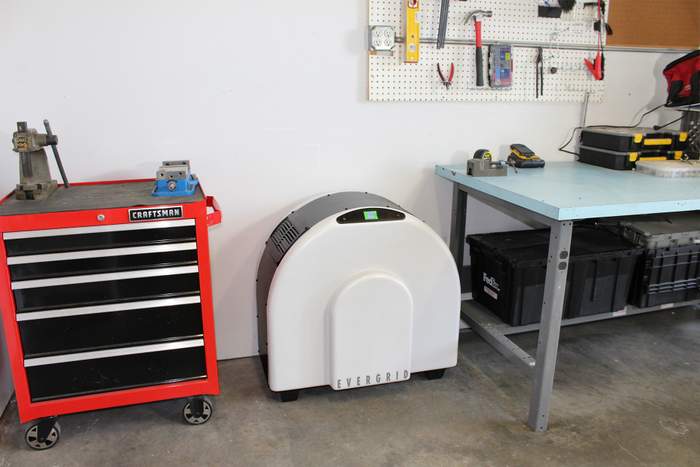 Available now? Maxout has been developing the Evergrid with the support of the American Made Solar (AMS) Prize, a competition designed to energize U.S. solar manufacturing. “With funding from the AMS and support from its network we have been able to take the Evergrid from concept to prototype in under twelve months. We are very focused on bringing the product to market within the next twelve months.”

Cummings said that the company is now contacting solar installers to assist with pilot testing programs. Maxout is also working to certify the Evergrid in advance of wider testing and sales. The company will focus its initial efforts in California, Florida and Puerto Rico, regions where the grid is particularly unreliable and where residential solar is both economical and productive.

“Affordable backup power has been a missing piece in the energy puzzle,” said Cummings. “We believe the Evergrid is that missing piece.”