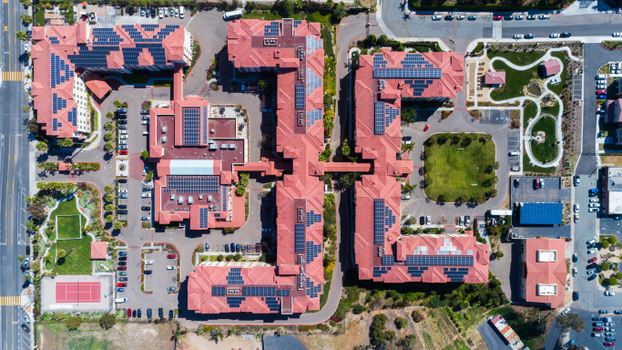 Generations LLC added an expansive 527.8 kW photovoltaic (PV) solar + storage system on its resort style independent, assisted living and memory care community, Paradise Village, in San Diego’s South Bay. Combining solar with a behind the meter energy storage system, the energy enhancing project will produce approximately 1 million kWh of electricity per year, approximately 40 percent of the campus’ annual electricity usage. In addition, an estimated cost savings of $250,000 in both regular and peak demand usage will be provided from the hybrid solar and low-cost battery storage system.

Generations LLC and NW Photon Energy (NWPE), both of Portland, Ore., partnered on the pro-ject which has been in development for three years. According to Kirk Cameron, President of NW Photon Energy, this project became viable as a result of four key factors.

1. The foremost was a healthy ROI with a payback of less than 5 years.
2. Helping Paradise Village gain control of its energy expenses and eliminate rising utility in-creases was the second factor.
3. Paradise Village’s qualification for a CPUC Self-Generation Incentive Program (SGIP) rebate covered approximately 5 percent of the total project cost and
4. The final factor was Generation’s 10-year refinance of a previous $82 million construction loan through Fannie Mae’s Green Rewards program – the first Green Rewards loan backed by a sen-ior housing property. This refinance provided exceptional terms and a reduced interest rate which contributed to the aggressive ROI.

According to Chip Gabriel, President of Development for Generations LLC, the business case for solar was clear to them from both a financial and environmental sense.

“With a large percentage of a residential housing community’s operating expenses originating from its energy usage, a sustainable approach to property management is crucial for the long term,” says Gabriel. “Adding solar was not only a financial decision but also one framed by the environmental impact that taking care of more than 400 residents creates.”

Generation’s commitment to solar is a continued example of their foresight and approach to property management. They have identified solar as a means to leverage underutilized roof space to improve operating efficiencies for their buildings.