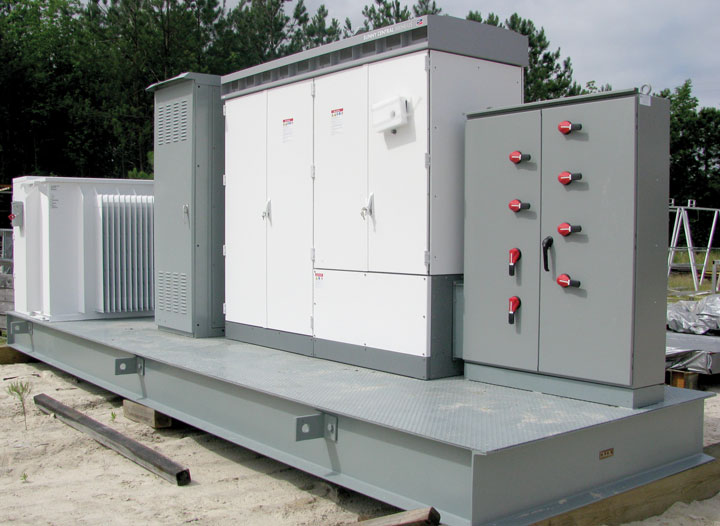 Closer to the grid connection, interrupt ratings are higher, which is why SolarBOS recommends fuses instead of breakers.

All large-scale PV projects will involve a ton of modules and only one grid connection, so all of the aggregation decisions made in between comprise a big chunk of a profitable project pitch. We asked two major eBOS suppliers for the trends leading the way in large-scale PV wiring in 2018, and both of them point to huge reductions in traditional DC wiring and an emphasis on fuses.

The most significant DC wiring trend for Jason Whitaker, president of Shoals, has been the migration away from the traditional combiner paradigm to harness assemblies, which is a big step toward simplification and reducing the amount of DC cable needed. The Big Lead Assembly (BLA) is a prime example.

“What previously had been the feeder cable, running from the inverter to the combiner, has now become the entire solution in itself: The BLA, a large conductor, tailored for each site, in which all the PV circuits are combined as they branch off from the BLA at the optimal electro-mechanical positions within the array,” he says. “This allows for a streamlined, plug-and-play installation.”

“If the ILF [in-line fuse] saves more than 25 ft of PV cable, it has paid for itself,” Whitaker says. “ILFs can significantly reduce both the amount of cable required within a PV array and the number and/or size of combiners deployed.”

On a typical tracker installation with combiners and component harnesses (ILFs), a 39 percent reduction in DC string wiring can be expected. Then, factor in the BLA, and that number moves to about a 51 percent reduction. Note: Shoals also recently partnered with Array Technologies on a solution tailored to its tracker system, which improves those economics even more.

“Optimization of the electrical and mechanical systems together will result in a decreased installation time while simultaneously increasing system reliability,” Whitaker says.

All that, coupled with significant labor savings will result in the lowest installed cost solution. The BLA not only provides value from a CAPEX perspective, it also offers significant savings in OPEX when you consider the increased reliability and the elimination of components that require operations and maintenance (O&M).

The philosophical shift in the industry from central inverters to string inverters in larger-scale applications has big implications for eBOS decisions. What was typically all DC aggregation is a big mix of DC and AC. Coel Schumacher, CTO of SolarBOS, sees this as a chance to install fused AC combiners and recombiners instead of breakers.

“Breakers are great for applications with variable loads — plugging too many devices into an outlet, a hair dryer in a bathroom. In a solar application there aren’t any variable loads or hair dryers, so if an overcurrent protective device [OCPD] trips, there is a real problem, and resetting the OCPD is the least of your concerns,” he says. “Breakers degrade with every use, so the more times they are used as a disconnect, the more likely they are to nuisance trip at some later time when they shouldn’t.”

“When a fuse is replaced, it will operate as it did when the original was new. A breaker on the other hand, after being reset, may not,” Schumacher says. “Breakers can also be more difficult to replace when they do eventually fail.”

Remember that every connection in a design is a source of contact resistance which generates heat, so one way to reduce potential for failure is to reduce those contact points. An example: Some systems are designed to connect the output lug to the copper bus bar using neutral bars attached with fasteners. This would mean one or more connections than is necessary and relies on small fasteners. Instead, SolarBOS uses a distribution block that directly connects to the incoming string wires and the output lug.

“Similarly, our positive bus bar typically connects to the next component directly with a bolted connection rather than using additional busbars or unreliable clamps,” Schumacher says. “Not only do all of these connections perform better, but there are fewer of them, which reduces the number of connections that need to be checked in maintenance efforts.”