Rapid deployment of distributed PV is causing new issues for the grid that will require some new regulatory considerations and new product solutions. CyboEnergy thinks it has one such solution with the release of its Dual-Output Off-Grid CyboInverter that can run two distinct types of AC loads such as an electric water heater or a refrigerator. CyboEnergy is best known for developing the Mini-Inverter, which possesses merits of both central inverters and microinverters,

“With the rapid deployment of renewable energy, the power grid in many areas can no longer take more on-grid solar systems,” said CyboEnergy CEO George Cheng. “For instance, Hawaii ended the solar net-metering program in 2015. In April 2016, ISO (Independent System Operator) in California forced temporary shutdown of large solar farms to avoid grid instability. For this reason, off-grid solar heating and cooling has a great potential in the U.S. and European market.”

The following graphic shows a 4-channel 1.2-kW Dual-Output Off-Grid CyboInverter that has two AC output ports to power different types of loads. Each inverter has four input channels that can connect to four solar panels or batteries and produce 1,150 W AC peak power. The product is patented, UL 1741 certified, NEMA 6 rated, and made in the USA. Based on the AC standards, four popular Dual-Output Off-Grid CyboInverter models are listed in the table below. 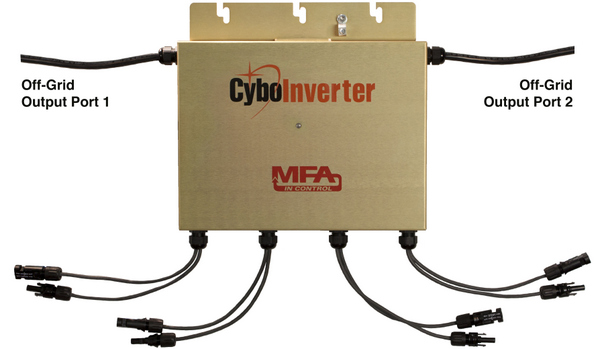 The following diagram illustrates an off-grid solar power system for heating and cooling with two dual-output off-grid solar power inverters, where a master unit is daisy-chained with a slave unit to form a 2.4-kW system. Four 300 W solar panels connect to four input channels of the two inverters respectively. One 48-V battery connects to the remaining four input channels in parallel to provide night-time power and surge power to start the compressor of an air conditioner or refrigerator.

In off-grid mode 1 (left side), the system can harvest solar energy from the solar panels and send power to a single- or dual-element electric water heater or area heater. In off-grid mode 2 (right side), the system can run lights, fans, computers, phone chargers, and a refrigerator. After the A/C and/or refrigerator is started, the required AC power will drop significantly. If the solar provides sufficient power to allow the inverters to run the A/C and/or refrigerator, the inverters will not pull power from the battery. This ensures a longer battery life.

An off-grid solar power system enabled by Dual-Output CyboInverters has many features and benefits including: (1) Does not require batteries for normal operations, (2) Dual AC outputs to enable off-grid heating and cooling, (3) Panel level MPPT to maximize solar power production, (4) No high voltage or high current DC so the system is intrinsically safe, (5) Flexible to build larger microgrids with multiple inverters, and (6) Cost-effective, and easy to install and maintain.