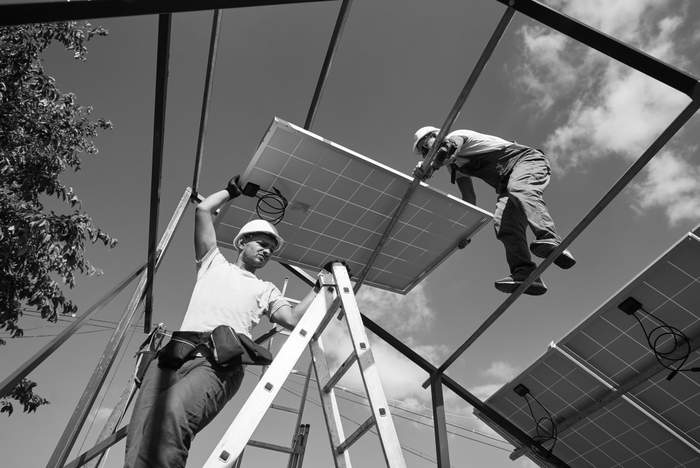 Stock images are another area in need of diversity.

Solar industry leaders have made diversity and inclusion top objectives. Two unrelated reports make the case the job training is an important factor in achieving this goal while increasing the overall pool of qualified workers in the industry.

Solar companies in Oregon and Washington understand the importance of workforce diversity, but they often do not know where to start or lack resources needed to diversify their employees, according to a new study released today by The Solar Foundation.
The Oregon and Washington Solar Workforce Diversity Report evaluates the workforce pipeline for the solar industry in Oregon and Washington, and specifically the practices surrounding diversity and inclusion, hiring, and training. This report looks at the progress made and challenges ahead in building a skilled, diverse, and inclusive solar workforce in the Pacific Northwest.

A majority of solar employers in Oregon and Washington say that in today’s tight labor market, it is difficult or very difficult to hire qualified workers. There is ample opportunity and need for Oregon and Washington to improve diversity in recruitment and hiring, in order to provide equitable access to employment and build a skilled workforce to meet the needs of a modern grid.

The Oregon and Washington Solar Workforce Diversity Report is based on qualitative interviews with solar companies, nonprofits, industry leaders, and training providers across both states.Key findings from the report include:

• Solar companies acknowledge the importance of workforce diversity, and are seeking to expand their workforce diversity and inclusion efforts, but many say they do not know where to start or do not have the resources to take necessary steps.

• Most of the companies interviewed struggle to find licensed electricians and Limited Renewable Energy Technicians (LRTs). Solar contractors should actively participate in the training of LRT and electrical apprentices to ensure a robust pipeline of licensed workers is available.

• The solar industry in Oregon and Washington has opportunities for rapid advancement. New hires who are unlicensed installers have the potential to be promoted to a mid-level position within one year or less, resulting in a 17 percent pay raise. For entry-level licensed installers, the expected pay raise after promotion is 28 percent.

The full text of the Oregon and Washington Solar Workforce Diversity Report can be viewed here.  The report was produced by The Solar Foundation, a national nonprofit organization, and sponsored by the Northwest Energy Coalition and Energy Trust of Oregon. It was funded in part by the U.S. Department of Energy Solar Energy Technologies Office.

New investments are increasing the growth of renewable energy in Illinois and creating jobs for minorities and underrepresented groups in the clean energy sector, according to a report submitted to the Illinois Commerce Commission (ICC). ComEd’s 2018 Workforce Development Report is related to the Future Energy Jobs Act (FEJA), enacted by the Illinois General Assembly in 2016 to strengthen the state’s Renewable Portfolio Standard. FEJA also stimulates economic growth through job training administered by ComEd statewide and implemented by schools, businesses and nonprofit organizations that recruit candidates, develop curriculums and manage the programs.

In 2018, the Solar Pipeline, Multi-cultural Job Training and Craft Apprenticeship programs produced 285 graduates. The training programs are made possible through three successive $10 million funding periods; the first installment was made in 2017 and future payments will be made in 2021 and 2025.

“The vast majority of the participants – 82 percent – completed their training in our first year, and that tells us they’re highly motivated to take advantage of emerging opportunities in renewable energy,” said Melissa Washington, vice president of governmental and external affairs, ComEd. “We congratulate the graduates and the 11 non-profit groups that are delivering the programs. We expect that this training will continue to gain traction as solar energy grows throughout Illinois.”

“We’re helping serious candidates gain the skills and the confidence needed to get into the solar industry and proceed as far as their talents will take them,” said Williams. “Solar is the future and it offers lots of opportunities.”