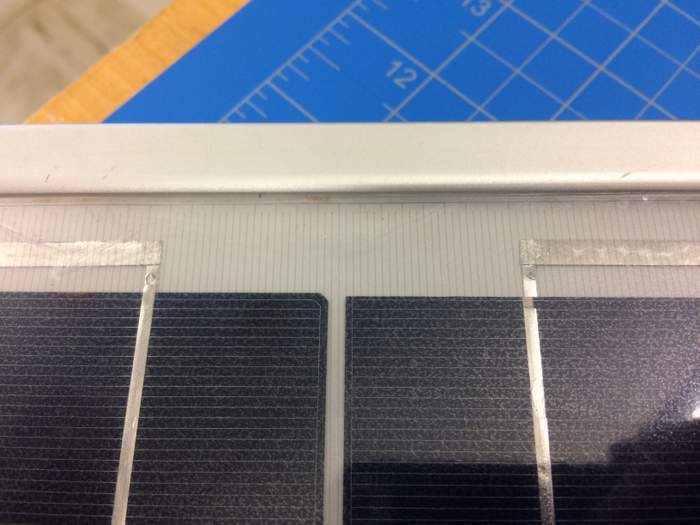 The EDS film on a small solar panel

The operation and maintenance (O&M) of solar plants presents a variety of long-term challenges. Even if we assume reliable inverters, modules with minimal degradation and perfect monitoring and prediction systems, the earth will still be covered in dust and debris and modules and collectors will need to be cleaned. Here are all of the ways this is currently accomplished:

Note the heavy use of water in many of those. Given the role of climate change in causing water scarcity (the World Health Organization estimates that half of the world’s population will be living in water-stressed areas by 2025), heavily relying on water for solar O&M is an unsustainable long-term solution.

So, robots then? Not so fast says Malay Mazumder, research professor in the Department of Electrical and Computer Engineering at Boston University.

“Robotic cleaning with a microfiber brush with vacuum cleaners requires customized design and installations of extensive rail systems covering the PV modules,” he tells us. “Water consumption is minimized in such a system but the installation of robots, cleaning of the microfiber cloth when the brushes become loaded with dust and the operation of the vacuum cleaners for a large utility-scale solar plant with a million square meters of PV module surface area or more, the capital expenses and manual labor intensive operation would cost approximately $55/m2/year, which does not appear to be an economically feasible cleaning solution.”

Mazumder isn’t just poking holes. His research team at Boston University has been diligently developing and testing an electrodynamic screen (EDS) film that has the potential to keep PV modules and concentrating solar power (CSP) mirrors clear of dust while drastically reducing the use of water and manpower (or robot-power). It’s still in the prototype and testing phases, but the technology holds the potential to be the most viable long-term PV cleaning strategy. 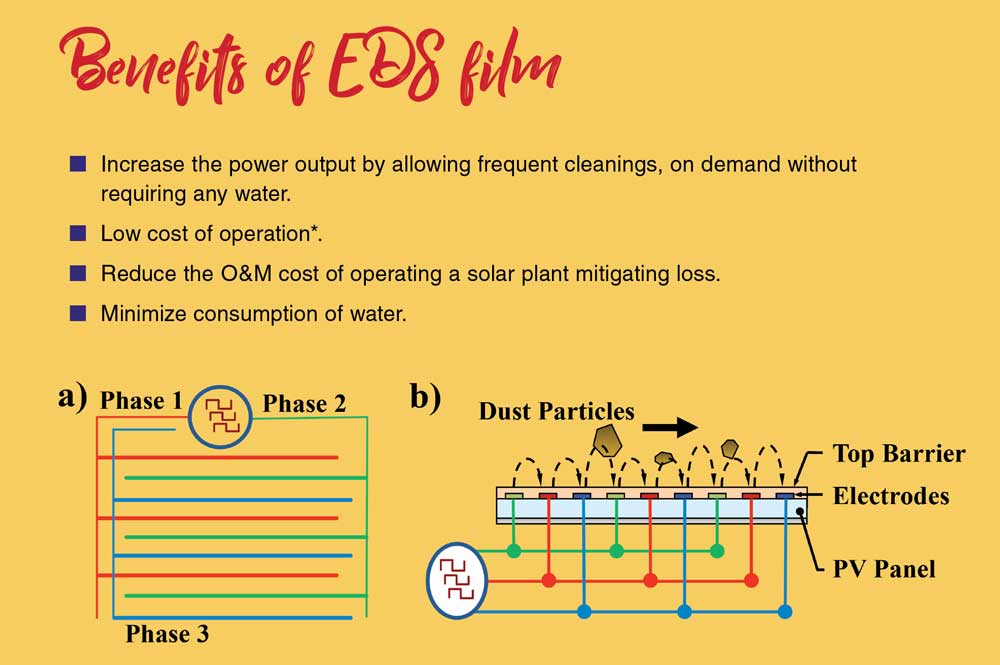 How does this work?

The Electrodynamic Screen consists of a series of parallel transparent conducting electrodes embedded between two transparent dielectric layers that can then be retrofitted or integrated onto the optical surfaces of solar collectors, such as PV modules and CSP mirrors. The EDS film generates a traveling electric field that charges and sweeps the dust particles from the module surface — no moving parts or water needed. The system would be energized by the production of the PV plant itself and could be programmed to run on a specified periodic basis or be triggered by a soling sensor on site.

The Boston University team has run its 5 in.-by-5 in. prototype through a variety of field trials and tested it at Sandia Labs. The testing at Sandia accounted for different geometries of the screen’s wires — the wire thickness, width, spacing in between and the impacts on optical performance of the PV module or mirror.

These results open up an entirely new approach to solar site maintenance, but cost and water savings aside, an EDS film could also help a solar plant hit optimal production output more consistently compared to the ups and downs experienced with today’s cleaning schedules.

“If you took an average in that period, the reflectance is quite low,” says Julius Yellowhair, researcher at Sandia Labs. “With EDS, you can clean as often as you like and maintain a high reflectance over that same period. Some simulations we’ve done where we compared with water cleaning, you see [water cleaned sites] drop until it is cleaned and then it jumps up again. With EDS, it maintains a steady reflectance over time.”

What are the caveats?

The test results are promising, but will EDS prove to be an economically viable solution after accounting for commercial production and installation? Until an industrial partner emerges to produce the EDS film at scale, it’s unclear what the actual all-in cost scenarios will be.

Based on the team’s modeling “if costs came in near $10/m2, then there will be 7.9 percent reduction in the percent change for the expected value … when compared with the deluge cleaning solution.” That is, the EDS technology is economically viable at that price point. This reduction can be further enhanced to 13.6 percent if the cost comes down $5/m2. The researchers say EDS technology is not likely to be economically viable if the cost stays at $20/m2 or more.

All of the completed tests at presstime have been with the 5-in. prototype. The team worked with Eastman Kodak Co. to develop a larger 30 in. by 30 in. prototype to further gather test results and has field trials planned at four totally different solar fields around the world to account for various dust types and scenarios.

There is work to be done, but given the long-term viability and operational challenges of alternatives in this space, even a costlier solution might be worth pursuing.