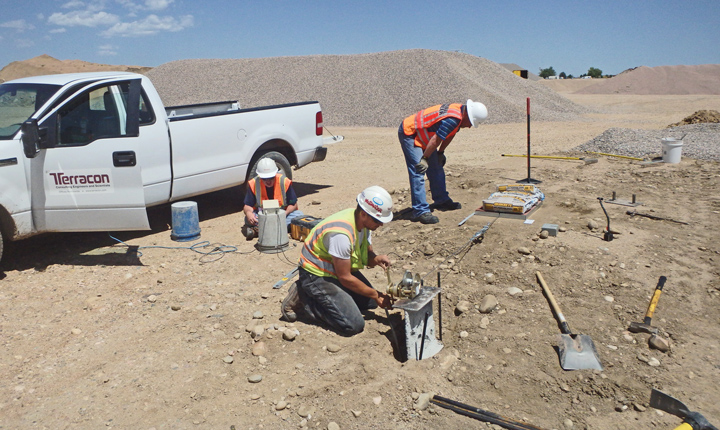 As solar energy becomes more popular in the marketplace, the technology continues to improve and become more cost effective. The rapid pace of development and highly competitive environment has incentivized solar companies to better understand how their products interact with the surrounding environment.

As an example, PanelClaw Inc. specializes in the development of commercial flat-roof and ballasted ground-mount solar equipment in North America. PanelClaw contacted Terracon to inquire about development of a full-scale field load testing program to evaluate the sliding resistance of its Panda Bear Ground Mount System.

The system is a ballasted mounting solution that is ideal for landfills, brownfields sites and other installations in which the ground cannot be penetrated. The structure sits on top of the ground with a mount that consists of a ballast pan, a post and a pre-assembled bracket that supports the solar panels.

The resistance to sliding for the ballast pans depends on several elements, including:

PanelClaw provided Terracon with several ballast pans, which were modified to facilitate the sliding resistance testing, accomplished by attaching a load cell to a ballast pan, and then pulling the ballast pan horizontally using a hand crank winch, fastened to a metal beam anchored into the ground. The sliding distance was then measured along with corresponding loads required to force the ballast pans to slide.

Terracon also worked closely with PanelClaw to fully understand how its initial analysis was performed when determining the contribution of sliding resistance to the ballast pan foundation capacities. Methods for applying factors of safety were also determined and added to this process.

Based on discussions with the client, Terracon elected to quantify the resistance to sliding for the ballast pans constructed on various subgrade materials using an alpha factor (a) for each of the test scenarios. The factor places a numerical value for quantifying the resistance of sliding between two different materials. For the purposes of our analysis, we defined the alpha factor as the ratio between the total normal force (including the ballast pan, paver blocks and sandbags) to the horizontal force applied to the ballast pan. PanelClaw indicated it would utilize the alpha factors calculated for the test scenarios at a total movement of 1/2 in.

There are numerous resources documenting frictional resistance between similar materials such as sheet pile design manuals, but Terracon was specifically requested to determine the sliding resistance for the actual ballast pans on various subgrade materials. The testing would account for the rivets penetrating the base of the ballast pans, openings manufactured in the base of the ballast pans and other considerations that a full-scale field load test would provide as compared to recreating the set up in a laboratory.

To provide additional resistance to sliding, PanelClaw uses shear pins on several of its products.  These shear pins are driven into the ground through pre-manufactured holes drilled through the ballast pans. A portion of the field load testing program was performed to obtain data regarding the contribution of shear pins to sliding resistance. Our testing provided PanelClaw with data that could be used for various subgrade materials when assigning additional capacity against sliding for ballast pans used with shear pins.

In the end, Terracon was able to work closely with PanelClaw and develop geotechnical parameters that were representative of its specific product. Terracon has also completed a similar testing program for a roof top solar system for PanelClaw involving various roofing materials at several locations across the United States.