Extensible Energy is billing its new software as a service (SaaS) solution, DemandEx, as a “virtual battery” — an inexpensive alternative to commercial storage as a method for reducing demand charges and increasing ROI for commercial solar projects. Extensible says DemandEx easily integrates into new or existing commercial solar systems and can achieve demand charge savings with or without batteries. Battery storage that is added can then be scaled down and added for backup power and resiliency. 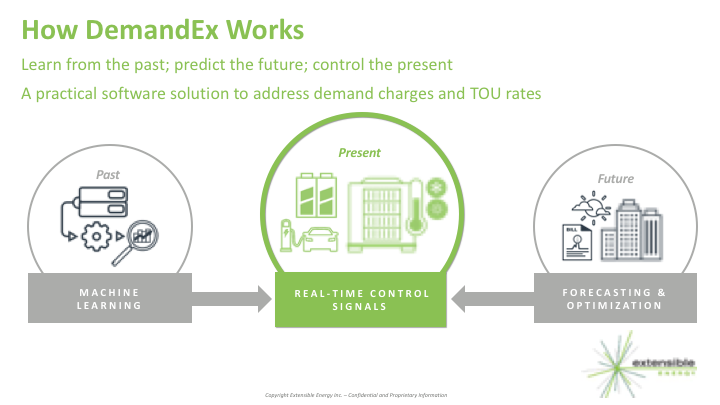 “The commercial solar market has shown slow growth in recent years, in part because solar is great at saving energy, but not on demand charges,” said John Powers, CEO of Extensible Energy. “One cloud can ruin your whole month. That’s why we created DemandEx – to help solar developers deliver much higher total savings on a commercial customer’s utility bill. We can control the flexible loads of the building to match the output of the solar installation, all without expensive new hardware or bespoke engineering.”

Check out all of our Solar Power International previews right here

“Load flexibility is the giant issue nobody is talking about,” commented Jigar Shah, Co-Founder at Generate Capital. “It’s less expensive than batteries as a means of matching solar resources with a building’s loads. Extensible Energy’s load-flexibility software is a win-win for the solar contractor and the building owner. Building owners get a higher ROI and faster payback time, and the solar contractor can offer an easy-install demand charge solution with or without batteries.”

Extensible Energy initially developed DemandEx with the U.S. Department of Energy and has piloted the software with commercial solar projects in Colorado and California. To date, customers have achieved their projected demand charge savings of 20-35% at a fraction of the cost of battery-based demand charge solutions.

“DemandEx is just the beginning,” said John Powers. “We’re now creating a suite of solar software solutions that will help solar contractors to shift from selling solar to selling complete energy solutions that make commercial solar sales more cost-effective with or without batteries.”