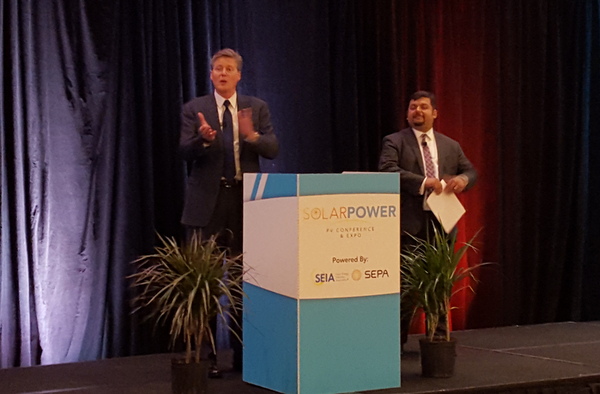 A round of applause for these four innovative Northeast projects at the 2016 PV Conference & Expo in Boston.

Four innovative and forward-looking photovoltaic (PV) solar projects were named winners of the 2016 Photovoltaic Project of Distinction award at the Solar PV Conference & Expo in Boston.

Each award-winning project represents the kind of innovation and industry collaboration that is paving the way for the transformation of the U.S. energy system and the future of the solar industry. The Solar Energy Industries Association (SEIA) and the Solar Electric Power Association (SEPA) are cosponsors of the conference and the award.

Below are brief descriptions of the award winners, including the names of the companies that worked together to complete them. All were recognized at the conference Feb. 24 in Boston.

And don’t forget our Project of the Year Winners.

National Grid’s Solar Phase II project locates and installs its PV systems on sites deemed to bring the most benefit to the electric distribution system, even if it presents a challenging construction. When completed there will be eighteen projects, built in specific targeted locations to help better service the grid, with advanced inverter functionality and remote control capabilities. Throughout this innovative project, National Grid has partnered with local solar developers and towns with aspirations of engaging local high schools and colleges to get them involved in an effort to expand the potential value these type of solar projects with learnings applied to future installs. Participating companies include:

The Palmer Airport project is the first and largest solar array on a qualified brownfield under the Massachusetts Department of Energy Resources SREC II program and is the result of a successful public-private collaboration. The project was constructed adjacent to a decommissioned landfill on the site of a former private airport. Three public entities – the towns of Leicester and Spencer, and Worcester State University — will all receive energy credits generated by the project, resulting in millions in cost savings. Participating companies include:

The Hopewell Valley Central High School solar project was implemented as a part of PSE&G’s Solar 4 All program, using integrated technologies to reduce solar impact on the grid and demonstrate reliability and grid resiliency. Located in Hopewell, New Jersey, it features an 876-kilowatt kW), grid-connected solar system with lithium ion battery storage. The solar system includes both a rooftop system on the school and a canopy system over the school parking lot. The system is metered from SREC sales, and provides community benefits in the form of lease payments to the school. The system will also allow the school to serve as a shelter and warming station during extended power outages and natural disasters. Participating companies include:

The Sippican Community Solar Garden is a unique business model that combined favorable state policies and incentives with smart technology and design choices to bring energy independence to residents, nonprofits and businesses in southeastern Massachusetts. The 900-kW project features Enphase microinverters and is expected to generate more than 1,200 megawatt-hours per year, helping more than 100 cooperative members across 23 towns to leverage the buying power of a large group to receive direct savings on energy costs. Participating companies include: