Solar trackers continue to take more market share in large-scale PV design, and the #TrumpTariffs may even encourage more tracker deployment, in order for more conservative investors who traditionally installed fixed-tilt under pre-tariff pricing look to boost long-term project value. Even before accounting for that possibility, according to new data from GTM Research, global solar tracker shipments hit a record 14.5 gigawatts in 2017. This represents growth of 32 percent year-over-year.

The data comes from GTM Research’s new report, Global Solar PV Tracker Market Shares and Shipments 2018.
The report notes that NEXTracker maintained its spot at the top of the shipment rankings, accounting for a third of all solar PV trackers sold worldwide in 2017. Array Technologies ranked second, and Soltec third. For the first time, Latin America was the largest market for solar trackers, followed closely by the United States.

“Mexico and Brazil are two of the fastest growing solar markets in the world, each accounting for over 1.5 gigawatts of tracker shipments in 2017, notes Scott Moskowitz, senior analyst at GTM Research and author of the study. “The U.S. utility-scale market was significantly stunted last year due to tariff uncertainty, so it took a backseat to Latin America.” 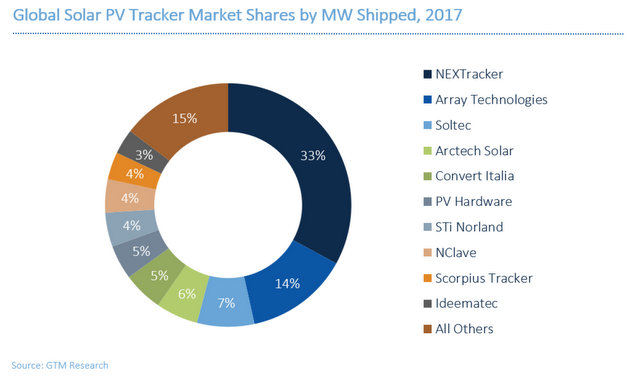 In spite of strong growth, GTM expects to see continued consolidation in the industry. The report notes that vendor margins continue to compress as the market grows, making profitable growth a significant challenge. There has already been one significant acquisition in 2018, with steel giant ArcelorMittal acquiring Exosun out of French bankruptcy court in January.

However, analysts at GTM Research remain optimistic. “Fundamentals in the global utility-scale solar industry are excellent, and trackers are an obvious choice in most developing solar markets,” said Moskowitz. “We expect 30 percent growth in 2018, with shipments approaching 20 gigawatts.”