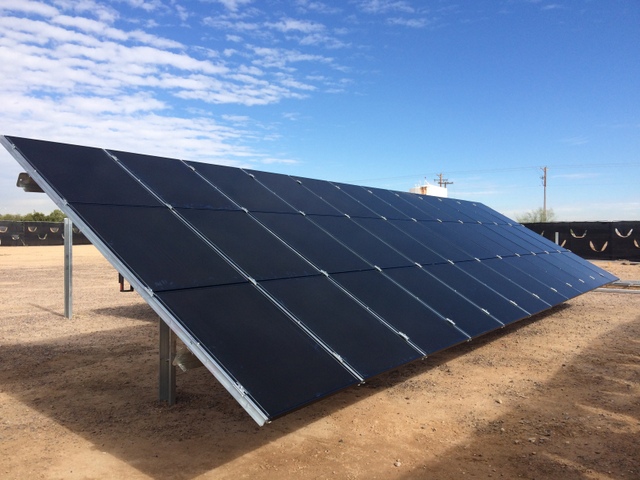 This OMCO Field Fast Racking system is one example.

The moment the tariff decision went into effect, our thought was to immediately find ways to bring system costs back in line with today’s expectations, even after accounting for this inflated module price. The Rocky Mountain Institute and 35 solar energy industry leaders apparently were way ahead of us, sending word about their commitment to develop an ultra-low-cost solar product able to operate in a variety of environments at fully installed costs as low as $0.50/Wp.

Participants at the Rocky Mountain Institute-hosted event, representing at least 15 gigawatts of solar capacity-equivalent to the capacity of 25 average-sized coal plants-identified an opportunity to reduce costs by $0.20/Wp in 2018 alone. Reducing costs at this scale would mitigate the effect of newly applied trade restrictions on solar components, keeping the solar energy industry on a maintained cost-reduction pathway.

The four-day workshop saw over 35 leading companies applying best practices in system design, supply chain, business model, finance, and market structures to the debate. Members identified a pathway to create a modular, pre-engineered and pre-assembled solar product of standardized design targeting a fully installed cost of ¢50/W and lower costs by as much as $0.20/Wp (dollars in watt peak) in 2018 alone, corresponding to about an 8%-percent reduction in the average national price of residential electricity.

In the last five years, the solar industry has realized year-over-year growth rates of 21%, attracted more than $100 billion in investment, and now employs more than 260,000 people in the U.S. as one of its fastest-growing energy sectors. Yet for solar to reach its full potential as a foundational, carbon-free energy source in the U.S. and around the world, it must compete without subsidy in wholesale markets.

“In addition to the benefit of a step-change in cost reduction, a more standard offering would be particularly effective in opening up new market segments of smaller installations, where the cost of project-by-project customization has diminishing returns,” said Thomas Koch Blank, Principal, Rocky Mountain Institute

Community-scale solar (CSS), also referred to as distribution-scale solar-installations of 1-10 MWp, cited close to load and connected to the distribution grid rather than the transmission grid-is emerging as a “sweet spot” for the build-out of solar energy development. In addition to low-cost electricity, CSS provides distributed benefits such as avoided transmission costs, reduced peak energy charges, potentially avoided capital expenditure for grid upgrades, ancillary services, and increased resilience.

Increased pre-assembly is going to have the ability to create jobs in the manufacturing sector and supply chain sector. Being able to communicate this as an integrated product offering, assembled in the U.S., that messaging is going to be important. There’s not enough emphasis on solar jobs being transferable skills for those being impacted by coal plant shutdowns. Many of these jobs have transferable skills that people can slide into pretty easily.