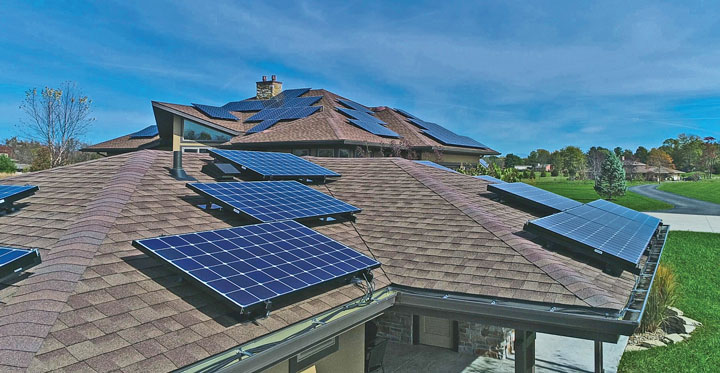 Bloomington, Ind., isn’t a typical solar energy hub, but homeowner Karim Abdelkader and Alex Jarvis, president of Solar Systems of Indiana, prove that it can be with the right customer and PV solution.

The goal for the Abdelkader family was to put panels on both their home and adjacent pool house, spanning over 4,000 sq ft to produce enough energy for both structures and the pool itself, offsetting their total energy usage by 80 percent. Abdelkader also wanted to be assured the panels would withstand the typical weather conditions in central Indiana (humid summers, snowy winters). What’s more, he wanted to install panels that would blend well with his home’s appearance.

For a savvy customer like this, the only option is a high-efficiency PV module that is reliable, durable and comes with a robust warranty. This led Jarvis and Abdelkader to install 58 LG NeON R panels to maximize the power output and cost-effectiveness.

“We started using LG about three years ago; they’re a great balance between efficiency and value,” Jarvis said. “I really like that LG is a globally diversified company. It’s a very stable and secure company that lends itself to an installer to put up equipment that we know will have support and project backing moving into the future.”

For starters, the LG NeON R produces 365 kW per hour (typical panels are about 350 kW per hour), which hit Abdelkader’s goal of offsetting energy by 80 percent despite the limited roof space available in this project.

Addressing Abdelkader’s concerns about durability and reliability, Jarvis explained the LG NeON R came with a 25-year labor and materials warranty that covered the panel if there were any issues. The warranty further ensured long-term stable operation, with a guarantee of at least 87.0 yield relative to initial performance after 25 years. The panels are also low maintenance, only requiring occasional routine cleaning.

“That was a key driver behind our decision — what does the warranty look like?” Abdelkader said.

The NeON R also has a black backing to better blend in with the roof line of the existing structures, maintaining the
aesthetic appeal of the home.

Construction was completed in October 2017 with the system expecting to yield an estimated 26,250 kWh/year. The installation was completed mid-month, but Abdelkader had already seen his full month energy bill cut in half. Bloomington’s net metering arrangement also allows Abdelkader to receive financial credit for the excess energy gained through the LG NeON R.

“The first month, Karim sent me a text and was very excited about how low his energy bill was,” Jarvis said. “Even without a full month of being energized the system has offset quite a bit, so solar has met his expectations and then some.”