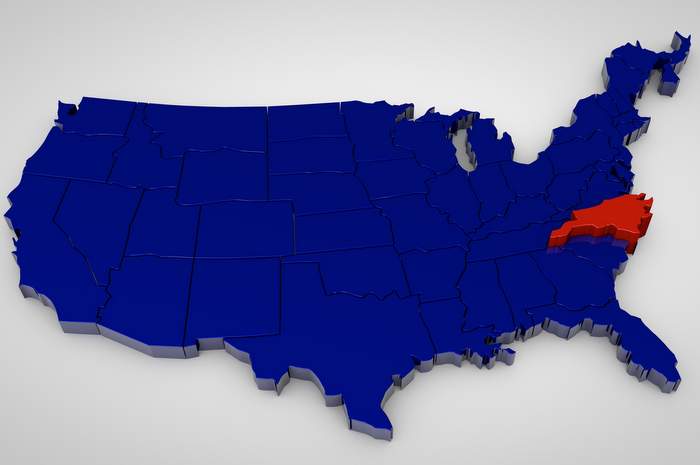 From Energy News Network: The solar industry is weathering the pandemic better in North Carolina than in most states, data released today by the Solar Energy Industries Association show.

The Tar Heel State will see 19% fewer solar workers than expected in June, according to the nonprofit trade group — hardly rosy projections but better than national predicted losses of 38%. A handful of states like New Jersey and New York will see cuts of more than 60%.

The sector’s resilience here, home to the nation’s second-most solar power, is owed in part to the dominance of large-scale projects, which take longer to develop and build than rooftop installations and are slower to react to the worsening economy.

But the industry warns that utility-scale projects could slow down markedly over the next year unless policymakers help inject liquidity into the market. And they point out the economic pain being felt today is disproportionately falling on the state’s rooftop installers — a small but growing slice of the market.

“I think it’s very positive in these economic conditions that the solar industry can continue employing people, especially in rural communities in North Carolina,” said Maggie Clark, the Raleigh-based senior manager of state affairs in the Southeast for the Solar Energy Industries Association.

But, she added, “just like the distributed generation companies are experiencing the heartache and pressure right now, the impact of the pandemic on utility-scale solar is going to be seen.”

North Carolina’s 6 gigawatts of solar capacity — enough to provide electricity to three-quarters of a million homes — comes overwhelmingly in the form of large-scale solar farms: rows upon rows of ground-mounted panels that can stretch over two dozen acres.

The size of projects here helps explain the industry’s strength in the face of the pandemic: Relatively few jobs are needed to build and maintain them. Of the state’s 43,000-some clean energy jobs in 2018 — a conservative estimate from the North Carolina Sustainable Energy Association — 15% were in solar.

Timing is also a factor. From financing, to negotiating leases with landowners, to connecting to the electrical grid, bringing large projects from conception to completion can take years. Most underway now began well before the pandemic hit the United States.

With construction declared an “essential business” that could continue under the state’s stay-at-home order, solar farms have proceeded more or less on schedule. (The order began March 30 but was relaxed somewhat on May 8, with only certain businesses like salons still shuttered.)

Solar companies lauded Gov. Roy Cooper’s administration for making clear which aspects of development could continue under the order and which could not. “There have been no guessing games for us in North Carolina the way there have been in some other states,” Clark said.

There have been hiccups in a few areas, where an in-person quorum of elected officials is required to approve new ordinances or new use permits for the land. With public meetings largely canceled because of the stay-at-home order, delays ensued.

Durham-based Carolina Solar Energy, which has developed over two dozen large-scale projects in North Carolina, was among those impacted. “One county is delaying the process to put in place a solar ordinance because the subcommittee charged with putting it together hasn’t met yet,” said CEO Caroline Harkrader in an email. But, she added, “no other issues so far.”

The Republican-led legislature attempted to solve the problem with legislation adopted unanimously earlier this month, allowing online quorums and virtual public participation during states of emergency. “This was a major issue that was flagged by many industries, not solar-specific,” Clark said. “The state legislature has done a really good job of listening.”

But while large-scale solar developers haven’t reported layoffs or furloughs in North Carolina, stories from the state’s small rooftop sector are mixed.

Christian Bruno, sales and operations manager for the Raleigh office of CED Greentech — the nation’s largest supplier of solar equipment to installers — says business was down about 20% in April. “But right now, May is looking pretty good,” he said. “What we’re hoping is that in June more projects will start to roll in.”

Bruno emphasized that his company wasn’t taking the public health crisis lightly, adopting measures like sanitizing the building, requiring employees to wear masks, and performing temperature checks daily. But compared to some of his colleagues around the country, he said, “down here in the Southeast we’re actually doing pretty okay.”

In fact, installers promoting battery storage coupled with solar panels are actually seeing a slight uptick in sales, he said, perhaps reflecting an instinctual reaction against the pandemic. “The idea of energy independence is what most people are into right now,” he said.

Kathy Miller, co-founder and CEO of installer Yes Solar Solutions, echoed that view. The Cary-based company is still closing contracts, and a good percentage include battery storage, she said in an email. “Energy security is a (big) bigger issue now.”

But while Miller said her sales had picked up since a mid-March low, business is still slower than before. “I keep reading industry studies that say consumers are more interested in solar than ever, and of course, they have more time. But despite more interest, consumers seem to want to wait to see long-term effects on the economy and their own financial stability,” she wrote. “We have a list of those who want to be contacted ‘post-COVID 19’.”

That tracks with information gathered by the Solar Energy Industries Association, which doesn’t disclose the identities of the companies that participate in its surveys. Prospective customers aren’t buying because they’re worried about job security, the group says. At least one residential installer in the state has laid off a third of its workforce and cut compensation 40% for employees that remained.

“It makes me very sad,” said Clark, who worked with the North Carolina Sustainable Energy Association before starting her current role in 2016. “These are people I’ve known for years. They are hurting and they are not seeing the light at the end of the tunnel.”

Clark and others in the industry say more hurt will come in six months to a year without policy change, especially when it comes to federal tax incentives.

Most of North Carolina’s solar capacity was spurred by those enticements — combined with state tax credits, the state’s clean energy mandate, and a federal law requiring Duke to contract with small independent power producers. The state’s implementation of the latter, called the Public Utility Regulatory Policy Act, or PURPA, was once among the most favorable to solar in the country.

Now, with lawmakers having repealed both those PURPA rules and the state tax credits, and with the clean energy mandate all but fulfilled, federal tax credits have become central to ensuring solar deals, large and small, pencil out financially.

Once 30% of the cost of a system, the credit was reduced to 26% this year and is scheduled to be 22% in 2021. Banks issuing loans, developers, or solar owners themselves must float the amount of credit until tax time.

But the pandemic has scrambled the first five months of 2020. “Congress intended the solar industry to have a 26% credit year,” said Bill Parsons, chief operating officer of the American Council on Renewable Energy. “COVID-19 is basically making that a wash.”

The public health crisis has also rocked the financial world, making tax equity investors who would normally monetize renewable tax credits sparse. The industry says providing alternate ways to convert those credits into cash would help solve the problem. “We need to provide some kind of temporary refundability for these credits,” Parsons said.

The Solar Energy Industries Association survey found 70% of respondents were concerned about the availability of tax equity financing. One large-scale developer reported that $1.5 billion worth of projects were at risk.

Chris Carmody, executive director of the North Carolina Clean Energy Business Alliance, also notes that the Trump administration has proposed a host of barriers to renewable energy, from tariffs to rules that disproportionately favor fossil fuels. “A tax credit is an affirmative action,” he said. “But just reducing the amount of federal government interference in the market would be a huge boon.”

Equally important for Carmody and others in the industry: leveling the economic playing field between them and Duke Energy, the investor-owned utility that controls grid connections.

For years, the company has complained that it can’t dictate where and how much solar is added to the grid, creating management headaches.

By 2017, the utility had halted nearly all new connections to the grid, leaving solar developers over a barrel. When lawmakers repealed the old PURPA rules that year, they hoped to break the logjam, moving most new development to a competitive bidding process and requiring the company to connect some projects languishing in its queue.

But implementation has been slow. Developers are still trying to push through projects that were in line before 2017, and the competitive bidding program has been hampered as a result. Plus, they and Duke have continued to debate grid connection terms and fees. But Carmody believes the debate may be coming to a close, with Duke and solar developers having reached agreement on interconnection after more than a year of negotiations. “If that transpires,” he said, “I think that will be helpful to those companies who have been working for six or seven years to get projects through.”

The industry also says that if the company plans to meet the goals laid out in Cooper’s clean energy plan, calling for a 70% reduction in greenhouse gas emissions from the electric sector by 2030, there’s no way solar and other clean energy sources don’t come out on top — even as the pandemic persists.

“There are a lot of assets in the ground right now that are producing very expensive electricity,” Clark said. “You could build new solar today and be saving money. We only expect that dynamic to improve.”

Elizabeth Ouzts is based in Raleigh, North Carolina, and has reported on the state’s clean energy transition for the Energy News Network since 2016. Her work on the state’s hog industry and its pursuit of renewable natural gas has also appeared in Environmental Health News. A former director of communications for the nonprofit Environment America, Elizabeth brings nearly two decades of experience in environmental and energy policy to her reporting.