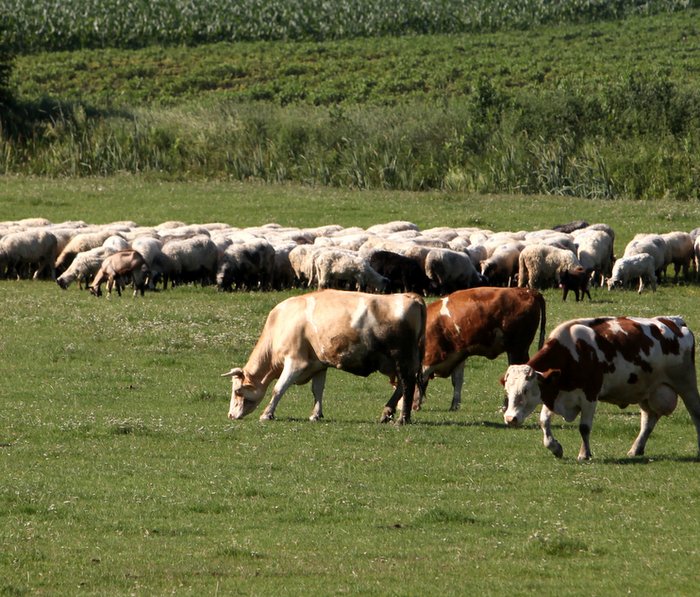 What if renewable energy was not just sustainable but was also regenerative? This is the goal of a partnership between White Oak Pastures and Silicon Ranch Corporation, an independent solar power producer under the umbrella of Shell. In 2020 alone, this partnership will bring holistic planned livestock grazing and regenerative land management practices to nearly 2,400 solar farm acres in Southwest Georgia to create carbon sinks, restore biodiversity and soil health, and add to the environmental, social, and economic benefits of these clean energy projects.

Globally, we produce most of our energy and food using reductive and extractive methods designed to maximize profitability. Renewable energy would seem to be a viable solution to our energy needs, but climate scientists fear the destruction already done to the atmosphere, soils, water supply, and biodiversity cannot be reversed by simply sustaining collapsed ecosystems. In addition to their dire warnings about global warming, the Food and Agriculture Organization of the United Nations now estimates we have only 60 growing seasons left unless industrial agriculture evolves rapidly to protect and renew our topsoil.

When White Oak Pastures learned that their ‘radically traditional farming’ practices were sequestering more carbon than grassfed cows emit in their lifetimes, they knew the results were repeatable. Through the use of planned livestock grazing, which moves animals daily and restricts grazing to model how herds of ruminants behave in the wild, White Oak Pastures has increased organic matter in their soil from 0.5% to over 5%. That is the equivalent to approximately 919 tons of CO2 taken out of the atmosphere per year.

Solar power plants are projected to occupy over six million acres of land globally by 2030 and the solar industry will be responsible for the stewardship of this land. In recognition of this responsibility, in 2018, Silicon Ranch established Regenerative Energy, a holistic approach to the design, construction, and operation of solar farms that pairs regenerative agriculture with solar power generation and sets a new standard of excellence for the industry. Under this outcome-driven model, Silicon Ranch is partnering with White Oak Pastures and employing their flock of sheep and holistic grazing methods to manage vegetation, remove carbon and other greenhouse gases from the atmosphere and store them long-term in the soil, restore overall ecosystem function, and strengthen the rural economy.

“There are no losers in this deal,” said White Oak Pastures’ owner Will Harris. “The Silicon Ranch land will remain pastoral. Our rural community gets much-needed jobs, and a new non-polluting industry to be proud of. We will sequester even more soil carbon and create a record of the ecological impact for others to repeat. Consumers can participate by purchasing the pasture-raised meats that were grazed at Silicon Ranch on our website.”

One issue that remains to be solved nationwide is to minimize agricultural tillage, which releases stored soil carbon back into the atmosphere. This is not a problem at Silicon Ranch properties, where the above-ground infrastructure and solar panels, which have at least a 40-year useful life, prevent tillage and the related release of carbon stored in the soils.

“As the long-term landowner and operator of our entire portfolio, Silicon Ranch is deeply committed to our Southwest Georgia community along with the many other communities we serve,” said Reagan Farr, Silicon Ranch Co-Founder and CEO. “We’re excited about the meaningful environmental, social, and economic benefits this innovative partnership will bring to the region. Silicon Ranch is delivering Regenerative Energy because it’s the right thing for the world and we’re honored to be partnering with Will Harris, who understands that what is going on beneath our feet in the soil is just as important as clean electricity generation to the health of our planet.”

“The symbiosis of regenerative agriculture and renewable energy creates a very real, and a very resilient, terrestrial carbon sink,” said Michael Baute, Silicon Ranch’s Director of Regenerative Energy. “For me, the Energy-Food-Carbon nexus is the most exciting thing happening in the climate solutions space right now.”