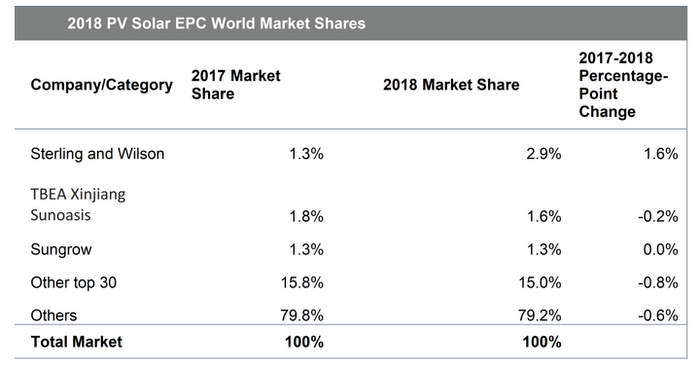 India-based Sterling and Wilson ascended to the top position in the global solar engineering, procurement and construction (EPC) market in 2018, as the company’s PV installations more than doubled for the year.

Sterling and Wilson’s PV installations rocketed by 127 percent last year, reaching 2.7 gigawatts (GW), up from 1.2 GW in 2017, according to the Solar EPC and O&M Provider Tracker. This allowed the Indian company to surpass China’s TBEA Xinjiang Sunoasis as the largest EPC provider globally. TBEA Xinjiang Sunoasis had occupied the market’s top spot from 2015 through 2017.

TBEA Xinjiang Sunoasis maintained a global market share of 1.6 percent in 2018, down only slightly from 1.8 percent in 2017, despite last year’s slowdown in the Chinese market. Overseas projects in countries like Egypt offset some of the company’s domestic market decline.

Inverter manufacturer Sungrow also demonstrated the rising prominence of its EPC business by ranking second in China and third globally with a 1.3 percent market share.

The 30 largest EPC providers in 2018 installed 19 GW of non-residential PV, representing 21 percent of the total market. This slight decline from 23 percent in 2017 demonstrates the increasing fragmentation of the EPC market on a global scale.
Non-residential PV growth presents opportunities

In 2018, the non-residential PV market outside of China expanded by a robust 34 percent, mainly as a result of growth in India, Australia, Europe, the Middle East and Latin America. This has enabled established EPC providers to grow globally, but also has opened up opportunities for local entrants. Seven of the 15 largest companies outside of China—including Sterling and Wilson, Risen Energy, ACS, Acciona and BayWa—installed projects in more than one region, an indication of the growing internationalization of the EPC market.