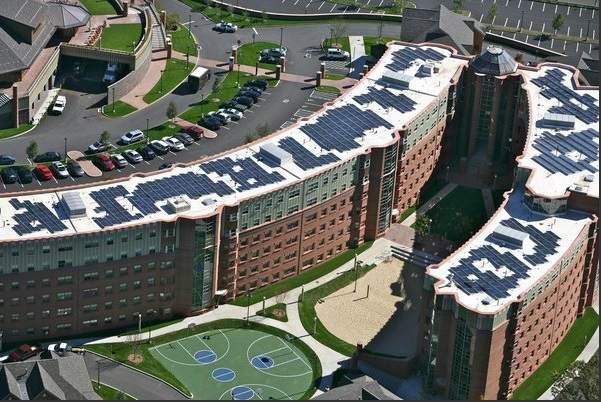 A unique power control system for Quinnipiac University’s York Hill Campus, located in Hamden, Connecticut, ties together a range of green energy power generation sources with utility and emergency power sources. The powerful supervisory control and data acquisition (SCADA) system gives campus facilities personnel complete information on every aspect of the complex system. Initially constructed when the term microgrid had barely entered our consciousness, the system continues to grow as the master plan’s vision of sustainability comes into fruition.

Focus on energy efficiency and sustainability

The final design includes a central high-efficiency boiler plant, a high-efficiency chiller plant, and a campus-wide primary electric distribution system with automatic load shed and backup power. The design also incorporates a microturbine trigeneration system to provide electrical power while recovering waste heat to help heat and cool the campus. Solar and wind power sources are integrated into the design. The York Hill campus design engineer was BVH Integrated Services, PC, and Centerbrook Architects & Planners served as the architect. The overall campus project won an award for Best Sustainable Design from The Real Estate Exchange in 2011.

Implementation challenges for the complex system

The ambitious project includes numerous energy components and systems. In effect, it was a microgrid before the term was widely used. Some years after initial construction began, Horton Electric, the electrical contractor, brought in Russelectric to provide assistance and recommendations for all aspects of protection, coordination of control, and utility integration – especially protection and control of the solar, wind and combined heating and power (CHP) components. Russelectric also provided project engineering for the actual equipment and coordination between its system and equipment, the utility service, the emergency power sources, and the renewable sources.

Alan Vangas, current VP at BVH Integrated Services, said that “Russelectric was critical to the project as they served as the integrator and bridge for communications between building systems and the equipment.”

Startup and implementation was a complex process. The power structure system infrastructure, including the underground utilities, had been installed before all the energy system components had been fully developed. This made the development of an effective control system more challenging. Some of the challenges arose from utility integration with existing on-site equipment, in particular the utility entrance medium voltage (MV) equipment that had been installed with the first buildings. Because it was motor-operated, rather than breaker-operated, paralleling of generator sets with the utility (upon return of the utility source after power interruption) was not possible in one direction. They could parallel the natural gas generator to the utility, but the generator was also used for emergency power, so they could not parallel from the utility back to their microgrid.

In response to the unique challenges, Russelectric designed, delivered, and provided startup for a unique power control system, and has continued to service the system since startup. The system controls all power distribution throughout the campus, including all source breakers – utility (15kV and CHP), wind, solar, generators, MV loop bus substations, automatic transfer switches (ATSs), and load controls.

As might be expected, this complex system requires a very complex load control system. For example, it has to allow the hockey rink chillers to run in the summer during an outage but maintain power to the campus.

• 15kV natural gas 2 megawatt (MW) Caterpillar CAT generator with switchgear for continuous parallel to the 15kV loop bus. Russelectric supplied the switchgear for full engine control and breaker operations to parallel with the utility and for emergency island operations.

• Control and distribution switchgear that controls the emergency, CHP, and utility.

• 12 ATSs for emergency power of 4 natural gas engines in each building.

• 721 rooftop photovoltaic panels gathering power from the sun, saving another 235,000 kilowatt-hours (kWh) per year. These are connected to each of the 3 dormitory LV substations. Russelectric controls the solar arrays’ breaker output and instructs the solar arrays when to come on or go off.

The system officially only parallels the onsite green energy generation components (solar, wind and micro turbine) with the utility, although they have run the natural gas engines in parallel with the solar in island mode for limited periods.

Since the initial installation, the system has been expanded to include additional equipment, including another natural gas generator, additional load controls, and several more ATSs.

Another feature of the Russelectric system for the project was the development of the Russelectric SCADA system, which takes the complexity and detail of all the systems and displays it for customer use. Other standard SCADA systems would not have been able to tie everything together – with one line diagrams and front views of equipment that provide the ability to visually see the entire system.

What really made this project stand out is Russelectric’s ability to handle such an incredibly wide variety of equipment and sources without standardizing on the type of generator or power source used. Rather than requiring use of specific players in the market, the company supports any equipment the customer wishes to use – signing on to working through the challenges to make the microgrid work. This is critical to success when the task is controlling multiple traditional and renewable sources.