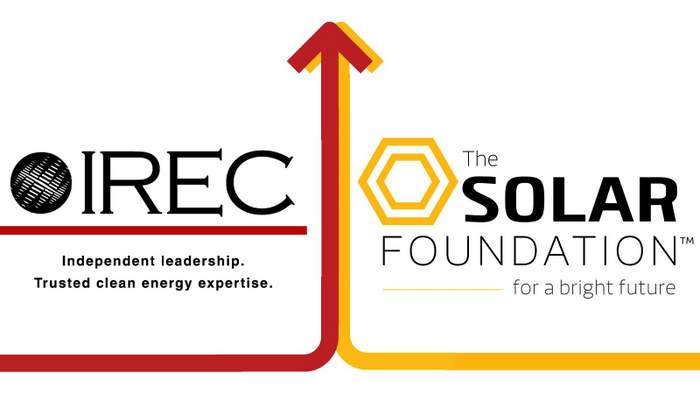 The Solar Foundation and the Interstate Renewable Energy Council (IREC) have signed an agreement to merge into a single, expanded nonprofit powerhouse dedicated to the rapid adoption of clean energy. The merger will combine the strengths of two renowned national clean energy organizations, effectively doubling the staff and quadrupling the impact. The Solar Foundation is the leading national nonprofit dedicated to accelerating adoption of solar energy and related technologies and, since its relaunch in 2010, has had a remarkable ten-year track record of leading cutting-edge research, education, and capacity building programs. IREC has been trusted for its independent clean energy expertise for nearly 40 years, playing a critical role in building the foundation for rapid adoption of clean energy by tackling regulatory, workforce, and economic barriers.

In addition to increased impact, longstanding mutual respect between IREC and The Solar Foundation and natural synergy between the organizations’ programs were key considerations in the decision to merge. The combined organization will support the accelerated growth of renewable energy and energy efficiency and a 100% clean energy future that is reliable, resilient, and equitable.

“I couldn’t be happier to announce this timely and transformational strategic shift,” said Andrea Luecke, President and Executive Director of The Solar Foundation. “I am extraordinarily proud of my achievements building The Solar Foundation from scratch, and creating, growing, and sustaining some of the solar industry’s most valuable and cutting-edge programs. For over ten years, I gave it my all, but as my Board and I steered our technology focus beyond solar, it became clear we needed to pursue a strategic partnership that would allow us to have even more impact in the decade to come. After much searching, I am pleased to have found the perfect partner in IREC!”

“Since 1982, IREC has been paving the way for accelerated growth of clean energy and more inclusive access to clean energy benefits,” said Larry Sherwood, IREC President and CEO . “We are thrilled to join forces with The Solar Foundation and welcome a new chapter in our organization’s history — one that enables dramatically increased impact at a time when progress on clean energy has never been more important.”

Why this is cool. IREC and The Solar Foundation both have longstanding reputations for their deep, unbiased expertise on the benefits and economic impacts of clean energy, and on the drivers of clean energy market growth. They both lead robust workforce development programs with an emphasis on diversity, inclusion, and equity in the clean energy fields. Both are deeply engaged with state and local governments to help streamline codes and permitting requirements and remove barriers to clean energy development.

The combined organization’s scope will include all renewable energy technologies (distributed and utility-scale)as well as energy efficiency. It will drive change via three strategic pathways: regulatory engagement, workforce development, and local initiatives (including permitting, code, and inspection issues). All programs of both organizations will continue operating, including The Solar Foundation’s Solar Jobs Census, U.S. Solar Industry Diversity Study, SolSmart, Solar Ready Vets, and the Puerto Rican Solar Business Accelerator, as well as IREC’s ongoing state regulatory engagement and its role as the sole accrediting body for clean energy training in the United States.

“With the climate crisis on our doorstep, now is the time to be practical and forge smart, strategic partnerships to reduce inefficiencies and multiply our impact,” said Mary Powell, Chair of the Board at The Solar Foundation . “This merger will broaden the scope of both organizations, while reducing administrative burdens and opening up opportunities for new initiatives. Together, The Solar Foundation and IREC far exceed the sum of their parts, and I will be so excited to see what the combined organization can accomplish in the crucial decade
ahead!”

“Uniting with The Solar Foundation will allow IREC to significantly expand the reach and impact of its mission and programs. This strategic merger will amplify our longstanding efforts to increase clean energy and energy efficiency to benefit people, the economy, and our planet,” said Larry Shirley, Chair of the Board at IREC . “I am looking forward to seeing the accelerated progress the combined team will achieve in the coming years.”

“Over the past decade, The Solar Foundation has helped drive the solar industry’s exponential growth through its acclaimed jobs research, capacity building, and workforce development initiatives,” said Abigail Ross Hopper, President and CEO of the Solar Energy Industries Association . “IREC has also proven to be a leading champion of the growth we have seen in clean, renewable energy. I am thrilled to support the unified organization, which will be in a position to accomplish even more in this crucial decade ahead.”

“IREC’s independent technical expertise has helped level the playing field for renewable energy and energy efficiency, enabling significant growth of clean energy markets,” said Dan Reicher, IREC Board member, Senior Research Scholar at Stanford’s Woods Institute for Environment, and former DOE Assistant Secretary for Energy Efficiency and Renewable Energy . “By joining forces with The Solar Foundation, the combined organization is poised for even greater impact. This strategic merger also comes at a fortuitous moment as we welcome a new President who has committed to bold action on climate change and clean energy that can further accelerate the success of the merged groups.”

The merged organization will maintain offices in Washington, D.C. and Albany, New York, with many employees working on a remote basis.