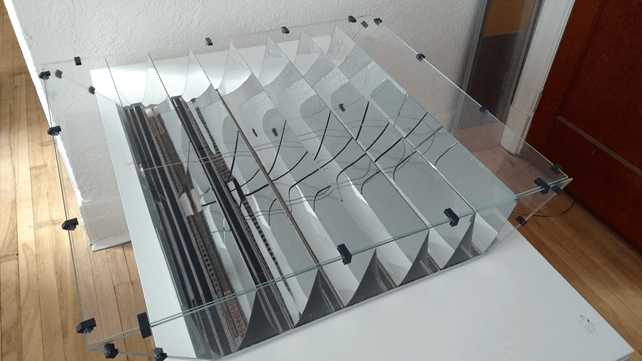 ISP Solar introduced its new ‘Intensifying Solar Panels’ at Intersolar in San Diego this week, which the company believes will provide power at half the cost-per-watt of any other solar panel in the world. By incorporating conic mirrors that intensify the sun’s rays 20 times, ISP modules require just 1/20th of the photovoltaic cells of traditional panels to deliver the same performance.

“Our goal is to make solar panels both more affordable and greener. By breaking the affordability barrier, we will deliver a faster return on investment for anybody considering renewable energy,” said ISP’s Co-CEO and the product’s inventor, Raja Singh Tuli.

When coupled with ISP’s proprietary silicon array, ISP’s intensifying solar technology boosts the performance so much that the resulting panel offers a much lower-cost alternative to traditional solar panels. By encapsulating mirror tracking mechanism inside the panel, ISP panels eliminate the need for heavy, expensive and unreliable tracking systems. ISP modules save further expense as well as space, allowing them to be deployed in both utility-scale and rooftop systems for C&I and residential customers.

The ISP module incorporates single-junction monocrystalline silicon with improved collector resistance, a large bus conductor, and conic reflective troughs to reach world-record-level efficiencies. The resulting system is ideal for the environmentally conscious customer, as replacing the majority of the comparatively expensive silicon PV cells with cost-effective mirrors also significantly reduces the carbon footprint and the toxic chemicals involved in end-of-life recycling of a solar power plant.

“Developed over four years of research and covered by multiple patents, ISP’s technology will help drive down the cost of solar energy and accelerate its adoption,” said ISP Solar’s Co-CEO, Suneet Singh Tuli. “Our work on making the world’s most affordable internet access devices led us to see how important an affordable energy supply is, and how that remains an enormous challenge for too many of the world’s people. We have rededicated ourselves to solving that problem by cutting the cost of solar power in half.”

ISP modules come with a full 25-year performance and equipment guarantee, reflecting the long-term reliability of the panels, in addition to their compelling economics.