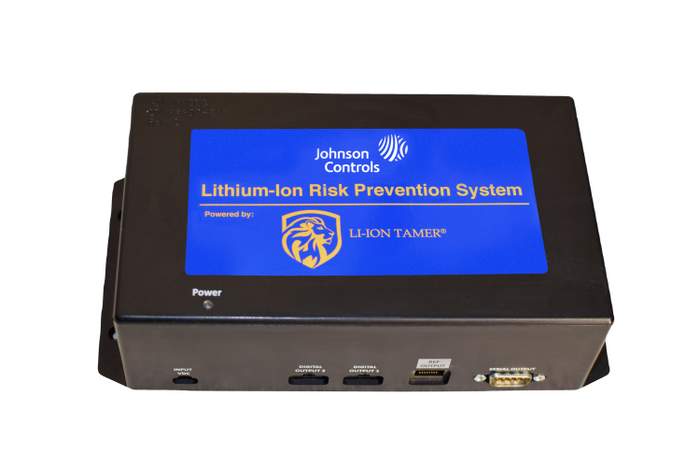 Johnson Controls has launched a system to provide early-warning detection of battery failure in Lithium-Ion Energy Storage Systems (ESS) and other applications using Lithium-Ion batteries such as UPS systems in data centers and manufacturing facilities. By monitoring and mitigating battery failure before it presents a fire threat, the Lithium-Ion Risk Prevention System provides immense safety value for the energy storage industry, which is rapidly growing due to global emission reduction targets in renewable power generation – particularly solar and wind.

The Johnson Controls Lithium-Ion Risk Prevention System can be readily integrated into existing power storage systems since it does not require any electrical or mechanical contact with battery cells.

The risk behind Lithium-Ion batteries. Lithium-Ion batteries provide a cost-effective energy storage solution for solar projects, but they also pose severe risk if battery abuse occurs due to mechanical damage, charging failures, manufacturing defects or external heat. Battery abuse can result in thermal runaway – a dangerous chemical reaction within a battery cell that quickly spreads to adjacent cells. As it spreads, these cells collectively generate heat and smoke, which can potentially cause a fire event.

To help prevent catastrophic loss of assets, it is of paramount importance that battery cell malfunction is detected and mitigated prior to events that could lead to thermal runaway. This is best achieved by actively monitoring for Lithium-Ion off-gases, which are produced shortly after cell malfunction occurs.

When the sensors detect off-gas, they immediately and automatically communicate with the battery management system to shut down the affected battery stacks to help prevent thermal runaway. In applications where the off-gases can build and cannot be vented externally, an inerting system may be employed to help prevent the off-gases from igniting. Early intervention helps protect valuable assets – extending the lifetime value of energy storage systems while keeping surrounding assets intact.