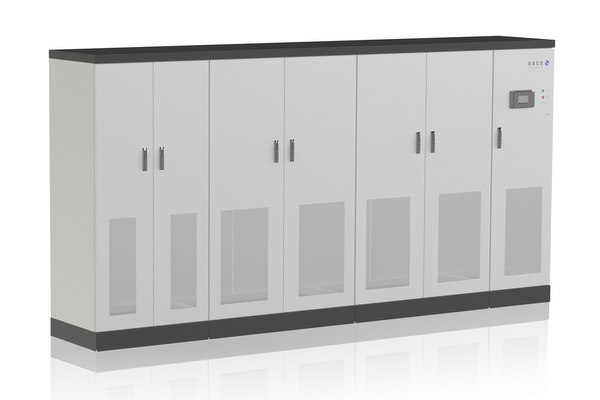 KACO new energy is opening up a whole new dimension with the blueplanet gridsave 1000 TL3: a storage solution in the megawatt-class. The unit assists utility companies, distribution grid operators, EPCs and large companies to balance energy generation and consumption on the power grid.

The blueplanet gridsave 1000 TL3 is a bidirectional battery inverter with a rated power of 1,000 kVA. By charging and discharging batteries it helps frequency regulation by means of static grid support and also offers a Fault Ride Through function. It thus contributes to the stability of the grid at every instant. The “grid” in question could be the national grid, or the grid-tied power supply of a small town or industrial facility. The size of the storage system can be scaled to requirements. Thanks to its technical features, the inverter is of course suitable for large-scale peak shaving, too. For this purpose, local conditions and needs should be checked in detail on site.

The blueplanet gridsave 1000 TL3 communicates via Modbus and Sunspec. These, widespread, non-proprietory protocols and languages enable the use of a large number of control systems to regulate the battery inverter. Individual storage system requirements can then easily be met. EPCs in particular, often aim at the implementation of a specific controller solution and are free when it comes to their own system design.

RELATED: How inverters are changing PV systems with bundled services

The blueplanet gridsave 1000 TL3 will be launched in the United States in the second half of 2016. The European market launch will follow soon afterwards. Large companies with high energy consumption have already enquired as to how they can optimise their self-consumption in future with this new blueplanet.

Ralf Hofmann, CEO of KACO new energy, classified the position of the blueplanet gridsave 1000 TL3 in the energy system as follows: “One regularly hears that storage units would form the backbone of decentral energy supply. Now we all know that a strong back needs strong muscles. With this high-tech product we are so-to-speak, supplying the strong muscles for the backbone of the energy turnaround.”