The 2015 Solar Power International conference kicked off with a stellar panel discussion that covered all of the big picture issues facing the industry today: the ITC, the Clean Power Plan, financing and the new technologies that might best supplement the solar industry going forward.
Here are some notes and observations of what transpired:

The presentation included some crowd interaction. The first question was about the job losses expected if the Investment Tax Credit expires as currently planned. About 44 percent expected no change, whereas 25 expected moderate losses and 23 percent expected significant losses.As you might expect, the expiration of the Investment Tax Credit caused the most concern among the panelists, even more so than the audience (The panelists: Steve Malnight, SVP of regulatory affairs for Pacific Gas and Electric Co.;  Rhone Resch, CEO and president of SEIA;  Julia Hamm, CEO and president of SEPA; and Nate Kreamer, CEO and president of Clean Power Finance.). Resch said a study that SEIA will be releasing during the conference reports that the entire industry should expect a loss of 80,000 jobs if the ITC is not extended.Things could change 30 to 80 cents a watt, which, at today’s PV prices, would obviously cause a chilling effect from investors. This is why SEIA, U.S. Rep. from California Mike Thompson and 40 co-sponsors are trying to table a bill that would extend the ITC for five more years. 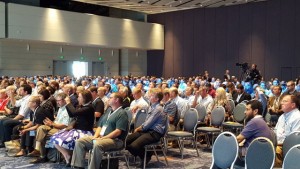 Next, the audience was asked: How much of a role will the Clean Power Plan play to drive growth? Fifty percent answered moderate and 44 percent answered significant.The panel was in agreement on the significance of the CPP, with Resch saying the final rule was 10 times better for the solar industry than it in the early going. The issue is the CPP won’t start to come into play until 2020 at the earliest, according to Resch – which is why they are fighting for that five year extension of the ITC, to bridge that gap.
When it comes to financing, Kreamer had a lot to say. There are more securitizations right now, but still a relatively small amount (“there are probably more for RVs right now”). Yieldcos have slowed a bit after appearing like the hottest option (“more volatility; tougher to get investors”). He said REITs are going to trend up, and the Community Reinvestment Act could be significant, as well.So, what’s the answer? Kreamer says all of the above, as there is no surefire solution. A balanced portfolio is the best bet.
On the issue of “What complementary technology us most important for solar?” the crowd majority was unsurprisingly with storage (74 percent) with a smattering of DER management (12 percent), advanced inverters (9 percent) and smart meters (3 percent). But Malnight, who was the only one affiliated with a utility, says the question should actually be which of those technologies will not best complement solar – because really they are all so valuable as everyone in that room pushes and works toward establishing the utility of the future.
And on the utility of the future, everyone seemed hopeful that wheels are finally in actual motion in certain areas after three years of slowly gathering buzz and momentum. Hamm mentioned the progress SEPA’s 51st State initiative, launched at last year’s SPI, has had in building bridges and starting some real conversations for big ideas: Imagine if you had a blank slate and could design a grid in the best, most efficient way possible, how would you do it? She says they are now starting to move from visions to practicality.

Stay tuned to Solar Builder this week for a ton more coverage. This link will keep you updated. Cruise through it and see what you may have already missed.