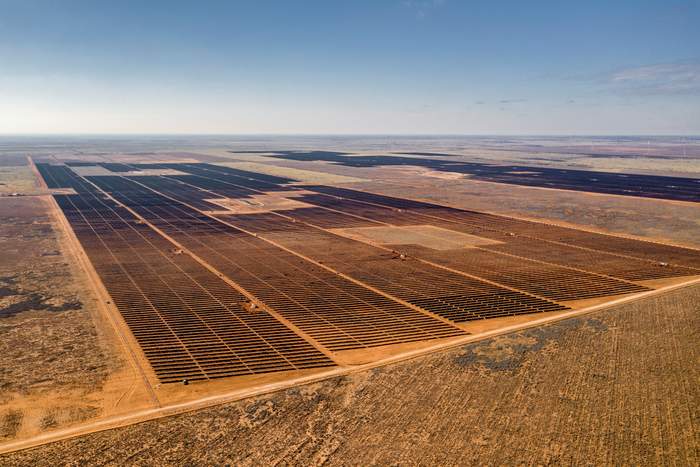 Prospero I, a 379MW solar farm under construction in Andrews County, Texas, is co-owned by Longroad Energy and AIP. The project, one of the largest in the US, will be comprised of nearly 3.2 million PV panels and is expected to be completed in Q2 2020.

Longroad Energy Holdings, a US-based renewable energy developer, owner and operator, announced the financial close and commencement of construction of the Prospero 2 Solar Project, a 331 megawatt direct current project located in Andrews County, TX. Longroad will manage construction as well as continue to own the $320 million project, which is expected to come on-line in the second quarter of 2021.

The Prospero 2 closing marks over 2 gigawatts of total wind and solar projects developed, financed, and built in Texas by the Longroad team.

“Building a project like this is an incredible team effort and we are happy for the support of University Lands, Andrews County Commissioners Court, Permian Regional Medical Center, Andrews Independent School District, and Andrews Economic Development Corporation,” Keel added.

The Prospero 2 project will cover more than 2,500 acres in Andrews County and deliver more than $9 million in property taxes, including almost $6 million to the Andrews Indpendent School District. The Project will also create several hundred construction jobs as well as jobs for the operating facility. Prospero 2 expects to pay more than $10 million in wages over the life of the project.

The project has two 15-year power purchase agreements, one with DaVita Inc. and another with a subsidiary of Zimmer Biomet Holdings, Inc.

“DaVita is committed to using 100% renewable energy and our PPA with Longroad’s Prospero 2 project will help make this happen,” said Peter Berkowitz, DaVita’s Vice President of Real Estate and Center Development. “Our previous PPA with Longroad helped us reach the halfway mark on our goal, and we expect that Prospero 2’s completion will carry us across the finish line.”

DaVita anticipates that its share of the projects under the two virtual Power Purchase Agreements with Longroad will generate as much renewable energy as the amount of electricity used in its North American operations.

The major project components are as follows:

U.S. Bank is the sole tax equity investor in the project. “We value our long-term partnership with Longroad and its founders – Prospero 2 is our seventh project with them – and we’re excited to work together to increase solar capacity and create jobs in Texas,” said Adam Altenhofen, senior vice president of renewable energy investments with U.S. Bancorp Community Development Corporation, the tax equity and community investment subsidiary of U.S. Bank. “Investing in solar is one of the ways U.S. Bank can be a responsible steward of the environment, address climate change, and also create jobs.”

“We are proud to extend our collaboration with Longroad by leading the Prospero 2 solar financing,” said Mike Lorusso, Managing Director and Group Head of CIT’s Power and Energy unit. “Longroad continues to be at the forefront of this major energy transition and CIT is pleased to have played a role in supporting them as well as the ongoing development of renewable power nationwide.”