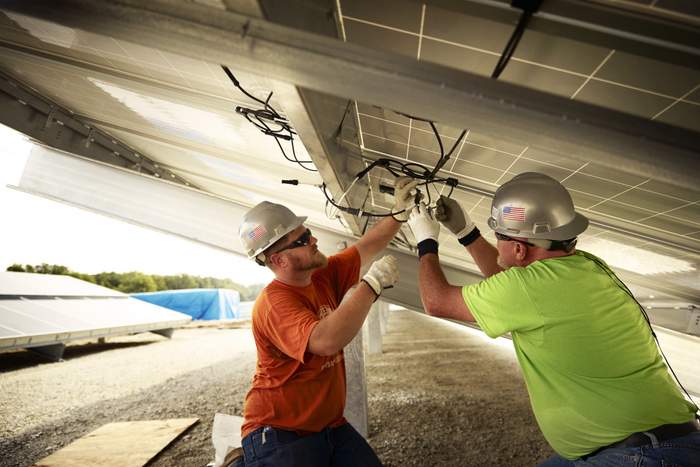 McCarthy Building Companies Inc. says it plans to hire more than 200 craft workers and 100 general laborers for Ranger Power’s Assembly Solar Project in Michigan’s Hazelton and Venice townships. This will be Michigan’s largest solar farm once these 300+ workers get it completed.

McCarthy plans to hire the majority of the workers from the local community, and is seeking applicants for positions ranging from entry level to experienced, including laborers, operators, crew leads, electricians and journeyman electricians.

The Assembly Solar Project, which is being developed on a 1,200-acre site of primarily fields and vacant land, received broad community support throughout the planning process. It is expected to reduce carbon dioxide emissions by 394,000 tons annually in the short term – equivalent to the yearly emissions of 77,702 cars.

To train entry level laborers or those new to the growing solar industry, McCarthy is implementing principles of Training Within Industry (TWI), a program originally developed by United States Department of War in the 1940s to help re-train workers quickly and reliably on moderately complex tasks. We wrote a feature on their methods here.

“We are continually working to incorporate more sustainable construction practices into our projects and hire and train locally to be the best builder of clean energy solutions in the nation,” said Scott Canada, senior vice president of McCarthy’s Renewable Energy group. “We are grateful to team up with sustainable-minded solar owners that understand the value of solar infrastructure.”

Area residents interested in working on the construction of the Assembly Solar Project should head to McCarthy’s site and enter “solar” to find job postings.