The year-end solar installation reports for the U.S. were a bit of a downer, but private funding in solar across the globe is up year over year, according to Mercom Capital Group’s 2017 Q4 and annual report on funding and merger and acquisition (M&A) activity for the solar sector. Total global corporate funding into the solar sector, including venture capital/private equity (VC), debt financing, and public market financing came to $12.8 billion (B), compared to $9.1B raised in 2016.

“A strong fourth quarter pushed overall funding higher in 2017. Higher installation levels around the world, the lack of threat to the solar investment tax credit, lower than expected tariff recommendation by U.S. ITC, strong debt financing activity, and over a billion dollars in securitization deals helped the solar industry have a much better year in terms of financial activity compared to 2016. After several challenging years, most of the solar securities were up in 2017 reflecting overall positive sentiments around the solar industry even as several Chinese manufacturers decided to go private. Of course, all this could change swiftly if President Trump decides to impose higher tariffs in the trade case,” commented Raj Prabhu, CEO and Co-Founder of Mercom Capital Group. 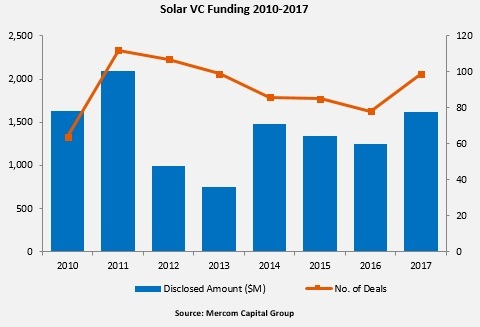 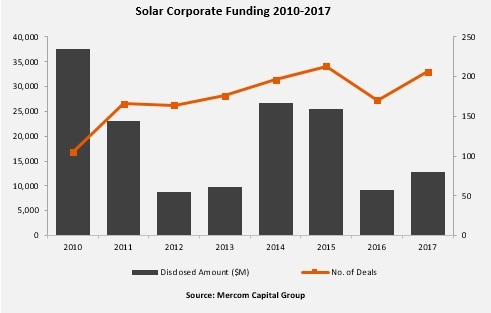 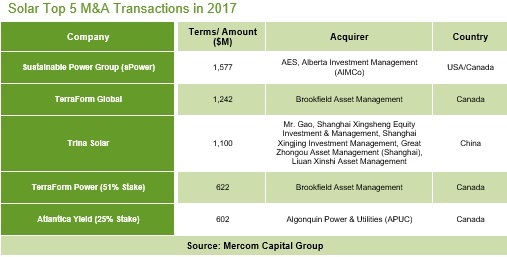 A total of 161 investors funded about 20.5 GW of large-scale solar projects in 2017 compared to 5.9 GW funded by 153 investors in 2016. The top investors in large-scale projects included Clean Energy Finance Corporation (CEFC), Santander, Commonwealth Bank of Australia, and Siemens Financial Services.

There was a record 228 large-scale solar project acquisitions in 2017 for more than 20.4 GW.
Mercom tracked 922 large-scale project announcements world-wide totaling 50.1 GW in 2017.