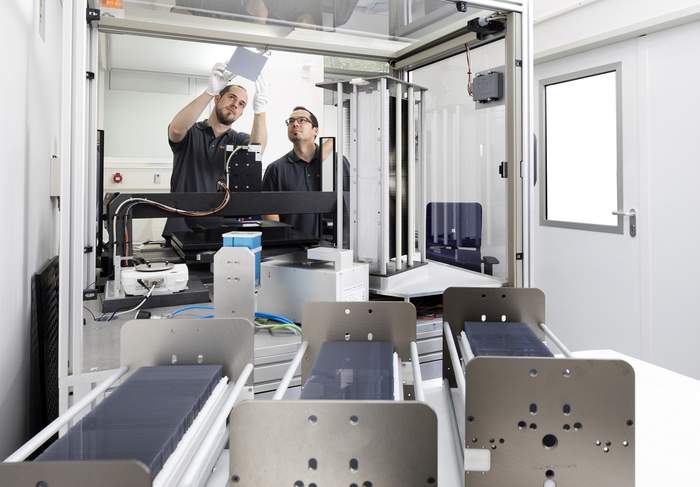 Pioneers of in-line epitaxy for production of high-efficiency monocrystalline silicon wafers, NexWafe GmbH completed of a $12 million USD capital raise to scale up its EpiWafers, which they say provide solar panel manufacturers with dramatically higher efficiency and uncompromised yield at 70 percent of the cost of traditional monocrystalline Cz-Si, all without having to retool their production lines. NexWafe’s technology also allows for production of ultra-thin wafers, already demonstrated in the company’s pilot line in Freiburg, providing a roadmap to next-generation ultra-thin and tandem architectures.

With this additional cash infusion, NexWafe will move forward with further industrialization of its EpiNex green high-efficiency solar wafer technology and begin its pilot manufacturing activities. As the company moves into its next stage, it is also intensifying discussions with potential partners to commercialize the technology. The company’s CEO, Davor Sutija, has a longstanding track record in creating such partnerships and will be leading this effort. He was appointed to his position in September.

What’s cool? By minimizing waste through its direct-gas-to-wafer manufacturing, NexWafe’s Epinex wafers are fully compatible with conventional solar cell and module manufacturing with a 70 percent reduction in carbon footprint of conventional wafers and at greatly reduced production cost. Using a proprietary process, a crystalline silicon layer is deposited on a seed wafer and then detached, producing finished wafers with an optimal thinness and superior material properties. The company has a 5 MW pilot production facility in Freiburg/Germany, with qualification shipments planned to start in 2021 and plans to raise further capital to support that activity. NexWafe was spun out from Fraunhofer Institute for Solar Energy Systems ISE in 2015.

NexWafe also announced that as it meets these important milestones, Peter Pauli will step down as Chairman of the Board of Directors to devote more time to other commitments. He will continue his association with NexWafe and remains a shareholder. “Helping to lead NexWafe on its transition from an academic spin-off to its emergence as a technology product company was a great honor,” Mr. Pauli said. “NexWafe’s EpiNex wafers are a key element of the future solar market, as the industry strives to meet expectations in terms of costs and PV efficiency.”

Bart Markus, a member of the Board of Directors of NexWafe since 2019, succeeds Mr. Pauli as Chairman. He brings more than two decades of experience as a serial entrepreneur and investor in high technology and holds an MSc in Applied Physics from the Twente University of Technology and an MBA with distinction from INSEAD. “I would like to thank Peter Pauli for the industrial perspective he brought to NexWafe, and for his invaluable leadership and service to the company,” Mr. Markus said. “Now, with this new funding and our new CEO in place, we will be able to take the company to the next level both in technology readiness with the pilot line as well as in commercialization of the technology.”