How long a product can be expected to perform at a high level is a fundamental indication of quality and durability. In the solar industry, accurately predicting the longevity of photovoltaic (PV) panels is essential to increase energy production, lower costs, and raise investor and consumer confidence. A new software package developed by the U.S. Department of Energy’s National Renewable Energy Laboratory (NREL) and industry partners SunPower and kWh Analytics is making the measurement of PV system expected lifetime performance more reliable, consistent and accurate. 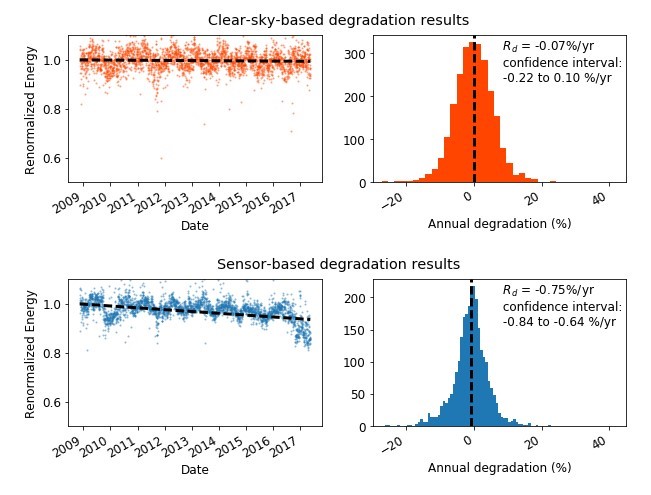 RdTools results show time-series data along with a year-on-year degradation distribution. The same system is analyzed with the clear-sky method (a), and sensor-based method with a poorly maintained sensor (b). In this case, high reported degradation is likely caused by sensor drift, rather than a degrading PV module

“There’s a high level of interest in this software because it provides user-friendly, accurate, and objective assessments that can help owners make sense of their data,” said Dirk Jordan, engineer and solar PV researcher at NREL. “We spent years building consensus in the industry around a common set of analytical rules. Now PV stakeholders can learn much more about the performance of their technology and improve decision-making on multiple fronts.”

PV module and system degradation have been historically difficult to assess in the PV industry. Field performance can be impacted by many confounding variables including ambient weather conditions, seasonal changes, sensor drift, and soiling, to name a few. Extracting system degradation rates previously required years of production data, high accuracy instrumentation, and the presence of staff scientists to conduct the evaluation.

The RdTools software package solves these problems by providing a robust and validated software toolkit for calculating and analyzing PV system performance and degradation over time. The tool can deliver valuable insights for manufacturers, engineers, investors and owners who have a stake in system performance, such as identifying under-performing sub-arrays, and quantifying system performance relative to neighboring systems.

For co-developer SunPower, the results of its own data analysis were compelling. “The RdTools method was used to analyze energy generation from 264 PV systems at locations across the globe, revealing that degradation rates were slower than expected,” said Greg Kimball, a senior performance engineer at SunPower. “The result prompted improvements to and extension of our warranty coverage to customers.”

According to Adam Shinn, a data scientist for co-developer kWh Analytics, RdTools is valuable because of the information it provides to the solar investors with whom they work. “As more and more solar is deployed, there is an ever-increasing amount of PV performance data available to analyze,” Shinn said. “For solar investors who seek to understand the long-term financial risks of their energy-producing assets, analysis RdTools will help them quantify PV durability.”

RdTools was led by a NREL team of researchers: Michael Deceglie, Chris Deline, Dirk Jordan, and Ambarish Nag and funded by the U.S. Department of Energy Solar Energy Technologies Office. The software is actively being developed as a set of open-source Python scripts and usage examples on GitHub and is publicly available to interested users who can access, download, and customize the software.