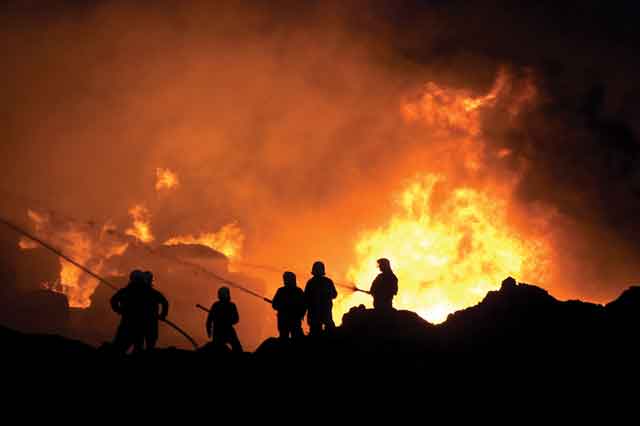 In August, a deadly blaze in Santa Clarita, Calif., continued to rage, as firefighters did their best to put out flareups from the Sand Fire, located dangerously close to some of the nation’s largest solar projects (near Antelope Valley). The fast-moving fire scorched about 35,000 acres of drought-ravaged terrain, destroyed at least 18 homes and claimed one life. About 10,000 homes had to be evacuated because of the blaze, which was fueled by triple-digit temperatures along with gusty winds and extremely dry vegetation — thanks to the region’s five-year drought — that hasn’t burned in years. Fire officials said that even vegetation in the area that isn’t dead is extremely dry, helping to fuel the “freight-train” speed of the flames.

Luckily, no solar projects were damaged from the fire, but it still serves as a great lesson; fire season is already upon us, but it’s not too late to prepare. Fire prevention is a big land management issue right now, especially after El Nino drenched most of the nation earlier this year. Weeds are at an all-time high. The past decade of droughts and catastrophic wildfires have left parched landscapes ill prepared.

Dry vegetation is an extreme hazard, especially around potential ignition sources. Owners and operators could probably expect more visits from the fire departments this year thanks to El Nino, so make sure you’re in compliance. Most municipalities or county fire departments have vegetation management regulations to remove or mow to a prescribed height before the start of fire season. Know that inspections are conducted throughout the dry season, and the property must be maintained in order to remain in compliance. Even if a property owner abates their property early in the season, there is potential for regrowth.

One of the biggest weed challenges our clients face is contending with the dreaded tumbleweeds (also known as Russian Thistle). In the Antelope Valley alone last year, we removed more than 2,000 tons of tumbleweeds (that’s 4 million lbs), from both solar and wind projects. Tumbleweeds can cause serious problems when they get caught up in equipment. In order to prevent these problems, we always tell our clients it’s better to be proactive than reactive. Each tumbleweed can produce up to 200,000 seeds if they’re not removed from the site, and they also contain oils that can be very flammable. We will mow them while they’re still green and physically remove them from the site. We also use a chemical weed abatement program that requires careful planning and permitting.

For some power facilities, managing vegetation around equipment where an ignition source could occur is another best management practice. Around power transformers and inverters, vegetation should be removed from the ground in a radius of not less than 15 ft. Clearing this radius will help prevent a fire from starting if the component has a major failure that causes sparks. Inside the substations, fenced parameters should be removed to bare ground or rock. Low-growing vegetation is often encouraged as a means of mitigating dust, but it should be mowed to a height of 4 in. since this is an effective way to minimize fire hazards while allowing for low ground.

Most fire requirements are asking for large defensible spaces for the site, but codes vary by region. Clearing around equipment such as transformer pads and junction boxes is essential, along with the other obvious places on your sites, such as roads and buildings. A 10-ft radius around power poles will help prevent a fire from starting if there is any arching due to a failed component. Trees and other large brush should be cleared at least 8 ft below a power line.

Maintaining your roads will also help. Most roads in high-risk fire areas need a 20-ft distance on either side after a project has been constructed that allows for access and acts as a fire break. Using parameter roads and fence lines as fire breaks is a site’s best defense for the spread of fire whether the source is internal or external. Keeping the ground cover and fence line maintained may mean seasonal inspections and services to remove windblown vegetation that has accumulated. Vegetation in fence lines can become tinder, so this has to be cleared throughout the season too.

Fire safety starts with mowing as one small spark from a mower’s blade hitting a rock can result in a big fire. Given the high-dollar cost of the site owner’s assets that are at stake on solar projects, we recommend hiring safety-conscious licensed professionals with proven track records, especially given the chemical and mechanical weed abatement strategies used.

There are other professionals you can turn to. A great source for assistance in identifying potential fire risk is often times the county fire department. We recommend inviting them on site to help with the proactive approach we think is best. These are the kind of circumstances in which you do want to meet the fire department.

Will your project be threatened by fires this season? We don’t know, but we hope not! What we do know beyond a doubt is preparation now will reduce potential damage later. Set up operations and maintenance vendor agreements. Look at your policies; do they follow our best practices outlined above? Can your staff effectively manage the ongoing tasks that need to be performed? Between the wet winter season, followed by what is expected to be a dry summer season, fires are a looming danger for projects with catastrophic consequences. Given all of these potential devastating effects from improper land management, solar energy pros should take steps now to minimize damage and protect their projects.

Harvey Stephens is the vice president of operations at World Wind & Solar.