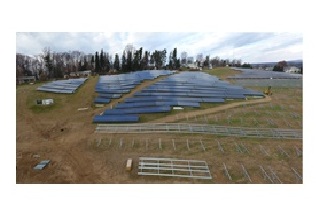 Masonic Village at Elizabethtown, Pa., is in the midst of constructing a 2 MW solar system, adding to an existing 1 MW solar array. Once the project is complete in February, after more than a decade of investing in clean energy, the not-for-profit continuing care retirement community will produce 23-25 percent of its electricity using a mix of solar panels and microturbines. The array will be one of the largest solar arrays of any retirement community in the United States, and it will save Masonic Village $250,000 annually in electricity costs.

“This project enables Masonic Village to build upon its existing infrastructure, and over time, see a positive rate of return, while also meeting our goals to be more energy efficient,” Patrick Sampsell, chief environmental and facilities officer, said. “The cost savings help offset the declining reimbursements Masonic Village receives for care and services as part of its charitable mission.”

The expansion will produce 2.2 million kWh per year and is expected to save $200,000 a year in electricity costs. In 2011, Masonic Village constructed a 1 MW ground-mounted solar photovoltaic system, which produces approximately 1.2 million kWh of electricity per year and results in costs savings of between $40,000 and $60,000 annually. Combined with the new addition, the system will produce approximately 15 percent of the campus’ electricity, and generate a rate of return of between 14 and 20 percent.

As part of a production sharing agreement with Solar Renewable Energy LLC, Masonic Village will invest approximately $1.8 million in the expansion over six years. Solar Renewable Energy will finance the remainder of the project costs and will remain the owner of the array for six years, after which Masonic Village will have the option to purchase the system.

After completing an energy benchmarking study last year, Masonic Village determined that energy costs between 2009 and 2015 decreased by 15 percent while the campus grew by 9.4 percent. Microturbines currently generate 10 percent of the campus’ electricity. The heat created as a by-product of the microturbines, in turn, heats water for a portion of resident apartments and the Masonic Health Care Center, reducing the use of gas boilers. Five microturbines were installed in 2002 (with a sixth added in 2010) and upgraded in 2007. The turbines reduce emissions by as much as planting 1,000 acres of forest per year.

Clean energy is part of Masonic Villages’ four-legged energy efficiency plan, the other legs being conservation, efficiency and smart technology. Other efforts include the use of environmentally-friendly materials and methods at all five of its Pennsylvania campuses, including water and electricity-saving fixtures, co-generating electricity, motion detector-controlled lights and the purchase of hybrid vehicles for company use. Staff constantly evaluate new technologies, such as solar light tubes and LED replacements for standard streetlights.