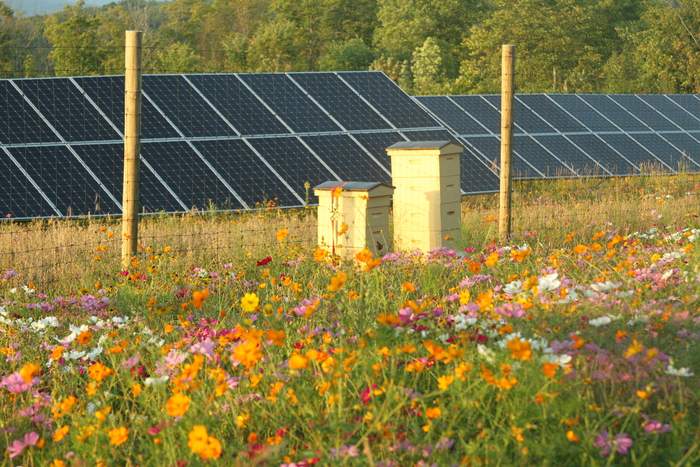 Driven by rapidly declining costs and 100 percent clean energy commitments from corporations and municipalities, demand for large-scale solar energy development is surging. The National Renewable Energy Laboratory (NREL) forecasts farmers and other landowners will lease 2-3 million acres of land for ground-mounted solar arrays by 2030, a 10-fold increase from 2020.

This rapid bloom in leasing land to produce solar energy isn’t just a lifeline for farmers looking to stabilize on-farm income, it’s also a once-in-a-generation opportunity to create habitat at scale to help species critical to agriculture and ecosystem health. Climate change and loss of habitat pose significant threats to honey bees, bumblebees, monarch butterflies and a wide variety of pollinators. A recent global analysis found that 40 percent of pollinator species may be at risk of extinction in the coming years (IPBES 2016).

Pollinator-friendly solar development is the practice of making meaningful, while incremental, changes to seed mix design and vegetation management practices in order to benefit managed and native pollinating insects and other wildlife. For utilities and other solar electricity buyers, the land under and around these sites presents an opportunity to realize ancillary benefits to ecological resilience and corporate social responsibility (CSR) while also reducing total cost of ownership and cost of energy produced.

Through close collaboration with companies including Engie, Enel Green Power and US Solar Corp., as well as energy policy advocates like Fresh Energy, beekeepers are accelerating use of ecological PV solar power plant designs that establish acres of flowering meadows under and around the panels. The pollinator-friendly designs aren’t just enjoyed by bees — Bare Honey and Old Sol, as well as Vermont’s Bee the Change, are delighting customers, partners and leading researchers with customized jars of honey that is “solar grown.” They are also collaborating with breweries, cideries and restauranteurs to use the honey as a hero ingredient.

And the Solar Energy Technologies Office of the U.S. Department of Energy seems to agree. SETO’s most recent Funding Opportunity Announcement included $6.5 million to be divided between four to six projects that will facilitate and expand the co-location of solar and agricultural activities including forage for pollinators and livestock.

From solar-centric to sustainable sanctuaries

Because the U.S. solar industry first took off in the desert Southwest, standard practices for the land on solar sites have included bare ground, gravel and shallow-rooted lawn grass. These “solar-centric” designs prioritize the solar configuration and give comparatively little consideration to land stewardship and other environmental and agricultural factors.

At the same time solar was taking off in the Southwest United States, solar was also growing rapidly in England and Germany, though with radically different engineering and design principles. With equal priority given to agricultural functions and enhancing biodiversity, solar sites with flowering low-growing meadows under and around the panels became a common practice.

As solar became cost competitive outside of the Southwest, these practices were noticed — particularly in the Midwest. In 2015, a group of energy, agriculture and conservation policy leaders came together in Minnesota to establish the nation’s first statewide standard for the vegetation that grows under and around large ground-mounted solar sites. The following year, the coalition unanimously passed the Pollinator-Friendly Solar Act into law. In the years since, several other states (New York, Maryland, South Carolina, Vermont, Illinois, Missouri, Ohio, Michigan, Virginia and North Carolina) have adopted similar standards to help ensure productive use of the land under and around solar facilities.

Implementation is straightforward — ensure the lower edge of the solar panels is one meter above the ground, have an ecologist design a seed mix suitable for the local soil and climate conditions, then hire a landscape manager with meadow and native plant experience. 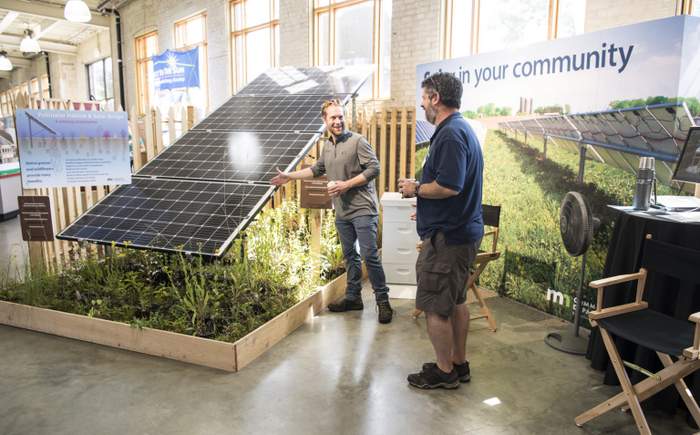 From the beginning, it was important to ensure the standards for the managed landscape in a solar array would result in meaningful benefits to pollinators. “We’re not talking about just a narrow row of native vegetation by the front gate that makes it look like a project is pollinator-friendly,” said Laura Caspari, a director with ENGIE, a company that has adopted pollinator-friendly development principles across its portfolio. “That’s why the standards are so important, because they provide a benchmark.”

New development, even of a solar power facility, on land that has been corn, beans, cotton or hay for a generation can result in people mistakenly thinking that using some farmland for solar threatens our food supply. But beekeepers and other conservation advocates have consistently highlighted the grave food system risk from lack of available healthy forage for pollinators.

Producing a single market-ready blueberry requires a pollinator to visit a flower two to four times, which sounds easy enough. But there are 5 million flowers per acre of blueberries, and all 64,000 acres grown in the U.S. are flowering around the same time. The story is similar for other crops. Each raspberry flower requires five to six pollinator visits to produce a marketable fruit. Each strawberry, 20 to 60 visits. These crops, and others, produce hundreds of billions of individual flowers, requiring trillions and trillions of visits by managed and native pollinators each year. In order to sustain these pollinators throughout the year, they need acres of healthy habitat for the times when the crops aren’t blooming.

In addition to helping pollinator populations, Clare Lindahl, CEO of the Soil and Water Conservation Society, sees the significant opportunity to benefit farmland soils. “Each year we lose tons of topsoil to our streams, lakes and rivers,” she said. “Acknowledging that state and federal funding alone can’t meet our conservation demand for healthy soil and pollinator preservation, there is a push in the conservation community to engage the private sector so that we can scale this work up to where it needs to be. The practice of pollinator-friendly solar will hold soils on site and enrich them over time — making an incredibly productive use of the space today and into the future.”

And there are functional and business benefits to the solar design approach as well. NREL estimates that site preparation costs for utility-scale solar projects account for 20 percent of utility-scale PV installed costs. Reducing these costs via low-impact development can lead to cascading reductions in other environmental-related costs and risks.

NREL’s InSPIRE (Innovative Site Preparation and Impact Reductions on the Environment) study is developing a formal assessment of baseline costs, cost reduction strategies and environmental impact reduction strategies for ground-mounted PVs. Pollinator-friendly site development, along with other approaches to co-locate solar and agricultural production and benefits, is one of the low-impact approaches being studied with several state-based project partners including Clif Bar, University of Arizona, Organic Valley, University of Minnesota, President Jimmy Carter’s solar farm, Denison University and several others.

Do’s and Dont’s of pollinator-friendly solar

Embracing innovation and committing to use ecological/agricultural landscape design to stack additional benefits into solar development is a positive sign that solar industry leaders are working to avoid negative tradeoffs that can accompany rapid growth.

Rob Davis is director of the Center for Pollinators in Energy at Fresh Energy.