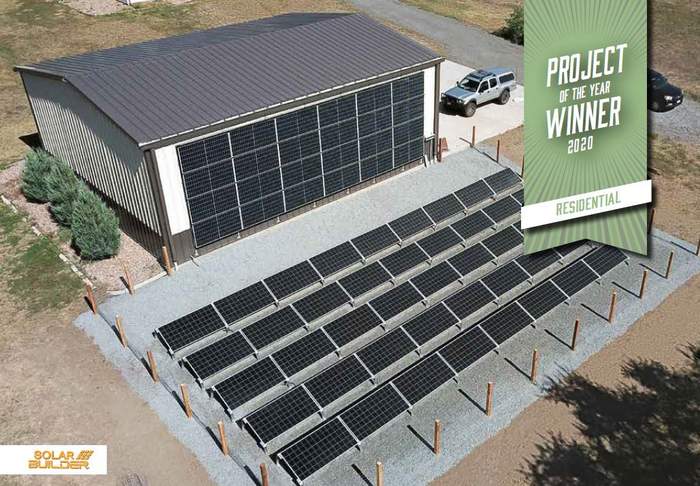 The 2020 Residential Solar Project of the Year, as voted on by the readers of Solar Builder, is the Villa Residence and Home Brewery, located in Arvada, Colo. It belongs to Keith and Jodi Villa, co-owners of Donovan Brewing. Keith also created Blue Moon once upon a time, so yeah, this isn’t just any home brewing setup.

“Constructing a 2-barrel pilot brewery on our property in Colorado was a natural thing to do for a brewmaster of 30 years,” Jodi Villa says. “The outbuilding already existed. All we needed to do was purchase the brewing equipment and upgrade utilities and we were producing great tasting craft beers. We soon learned, however, that a 3-hp glycol chiller used to keep jacketed fermentation tanks cool demands a lot of electricity. We also found out that the walk-in cooler we installed for finished keg storage also requires a lot of electricity. That is why we decided to take advantage of the endless Colorado sunshine and produce our own power using photovoltaic solar panels.”

After talking with multiple companies, Ecology Solar was deemed the best fit to tackle this fairly complicated project. Those electricity demands Jodi mentioned required 25 kW to offset 90 percent of the usage, and the roof “would not support the panels unless substantial reinforcements were added,” says Charlie Wilde with Ecology. “We looked at a ground-mounted system, but the owners wanted a low PV array profile due to possible aesthetic concerns from neighbors, so we kept the profile to single module height in landscape. The available land area wasn’t providing enough of an annual offset, so we looked at installing a vertical array on the barn wall, which passed structural evaluation.”

Racking for the wall mounted panels was customized by Stephen Bures, chief of system design and technical sales at Ecology Solar.

“I think it almost started, not as a joke, but it wasn’t necessarily serious at first, ‘hey what about the wall? There’s good exposure there.’ But from talking to the customer, we came to that as the conclusion. … it was maybe a little more expense and time involved, but they just happened to be the right customer and was agreeable to all of that.”

Bures says the permitting went pretty smooth. They were actually more concerned about how much square-footage was covered on the ground relative to the property than they were the wall. Ecology also completed the look of the ground arrays, with landscaping fabric, gravel and a surrounding fence.

“The resulting cost savings were immediate,” Jodi says. “Our electricity bill was reduced by over 90 percent, and we were able to take advantage of the federal tax credit program. Most of all, we are proud to be brewing our beers sustainably.”

Oh, and FYI, the new experimental beers the Villas are working on in this solar-powered backyard brewery? Cannabis beers. Gotta love Colorado.