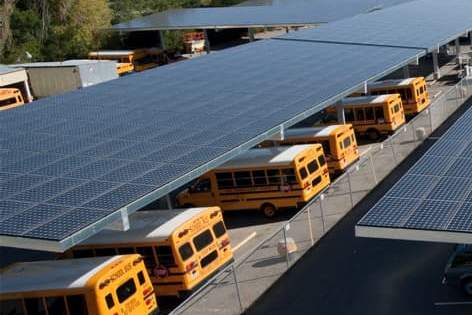 As deadly wildfires and Public Safety Power Shutoffs (PSPS) become the “new normal” in California, communities are increasingly turning to renewables-driven microgrids to maintain power for their most critical loads during grid outages that can last for days or potentially weeks. To bring these communities unparalleled economic, environmental, and resilience benefits, the Clean Coalition has been designing and staging Community Microgrids in California and beyond, including the Goleta Load Pocket Community Microgrid, which can ultimately provide indefinite renewables-driven resilience.

The Santa Barbara Unified School District (SBUSD) has taken note and unanimously approved an ambitious initiative with the Clean Coalition and Sage Energy Consulting to stage solar-driven microgrids and electric vehicle charging infrastructure (EVCI) at schools throughout the District. The microgrids will feature solar and energy storage that can provide long-duration resilience, along with EVCI that supports District staff and students during the day — and provides overnight charging options for neighbors who have challenges installing electric vehicle chargers where they live.

The Goleta Load Pocket (GLP) spans 70 miles of coastline, from Point Conception to Lake Casitas, encompassing the cities of Goleta, Santa Barbara, and Carpinteria. The GLP depends on 40 miles of transmission that originates in Ventura and terminates in the GLP-namesake Goleta Substation, near Dos Pueblos High School.

An initial analysis by the Clean Coalition identified over 15 megawatts (MW) of solar potential on SBUSD schools — the majority in the form of solar parking canopies. Seven of the sites are within low-income communities and could qualify for a pending enhanced energy storage incentive from the State of California that is intended to facilitate community resilience.

A Community Microgrid is a new approach for designing and operating electric grids. Going beyond traditional microgrids, which serve only a single customer, Community Microgrids can serve entire communities by providing indefinite renewables-driven resilience to the most critical community loads — and serve all loads for significant portions of time.

The levels of solar-driven resilience in this chart are achieved in California via a net zero level of solar combined with energy storage capacity equating to two hours of the nameplate solar production (for example, 200 kWh of energy storage for 100 kW of solar): 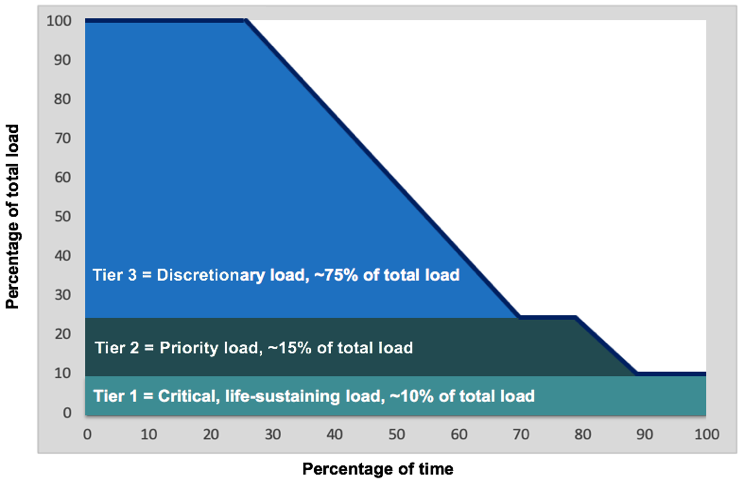 Schools are ideal sites for solar-driven microgrids, because they are located throughout our communities and often serve as emergency shelters. With large parking lots, schools are also well situated to benefit from solar parking canopies and EVCI. Schools can facilitate electric vehicle (EV) adoption by significantly increasing the number of publicly accessible charging stations — and providing access to neighborhoods that have limited options for charging at home. Apartment buildings, for example, have been notoriously slow in adopting EVCI.

The Clean Coalition and Sage Energy will conduct feasibility analyses for solar-driven microgrids and EVCI at all 18 SBUSD sites, and as determined to be feasible, followed by designing and executing a request for proposal (RFP) process to select a developer to build, own, and operate the microgrids under a long-term power purchase agreement (PPA). The aim is to contract the developer by June 2020.

The anticipated PPA structure will ensure that the SBUSD is free from any upfront investments and avoids all other obligations beyond paying for delivered energy. Hence, the SBUSD will pay only for electricity delivered by the systems, at a rate anticipated to be no higher than what the District would otherwise pay to Southern California Edison.

“The Santa Barbara Unified School District is showing tremendous leadership in planning solar-driven microgrids and electric vehicle charging to support the community,” said Craig Lewis, Executive Director of the Clean Coalition. “The District is taking a major step toward a resilient electricity system for the Santa Barbara region; and as one of the most important property owners in the region, the District is providing a shining example for others to follow.”

Importantly, in addition to advancing the SBUSD’s commitment to sustainability, these new energy advancements will provide education opportunities in the schools.

“Beyond providing a foundational education, our schools offer places of refuge that are relied upon in times of need,” stated Laura Capps, School Board President, SBUSD, during the public meeting that approved the contract to stage solar-driven microgrids and EVCI. “Sustainability and resilience are critical, and I am proud of the unanimous support being shown in this effort across the District’s Board, Superintendent, and other District leadership — and positive embrace by the broad community is greatly appreciated.”