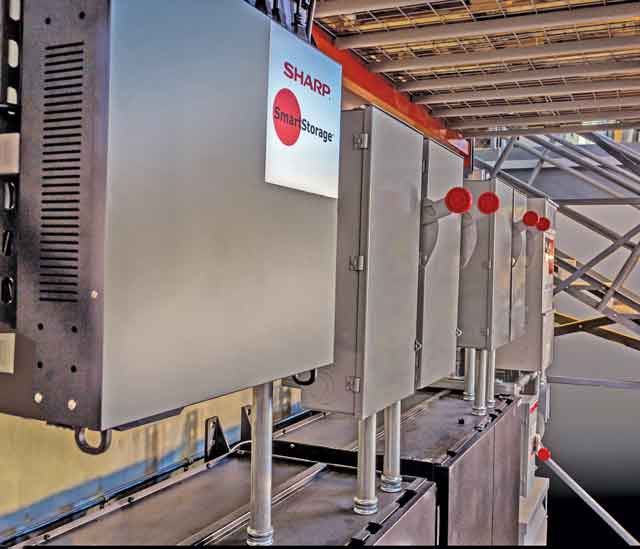 The SRUSD installations will be among the first projects deployed under California’s revival of the Self-Generation Incentive Program (SGIP) supporting solar PV and energy storage installations for customers in California. Generate Capital President Jigar Shah said of the project, “Generate is proud to accelerate the deployment of solar-plus-storage systems to bring cost-saving, clean energy solutions to schools, municipalities, and businesses across California.” Depending on the time of year, the SRUSD solar-plus-storage systems can supply as much as 70 to 80 percent of the schools’ electricity needs.

“This is a precedent-setting project, because, in addition to providing substantial utility bill savings, the SmartStorage system will also provide backup power for critical school loads in the event of a grid outage,” said Carl Mansfield, General Manager of Sharp’s U.S.-based Energy Systems and Services Group. “In the past, commercial buildings have relied on expensive diesel engine generators to provide backup power. This project will demonstrate that renewable power generation coupled with a SmartStorage system is now a viable, bankable, cleaner alternative for backup power applications.”

Generate Capital is a leading capital partner for solar-plus-storage innovators in the United States. The SRUSD projects represent one of the first solar plus storage projects supported by California’s recently restructured SGIP. With one of the largest behind-the-meter energy storage portfolios in North America, Generate Capital partners with project developers, technology vendors, and solution providers to build money-saving, environmentally beneficial infrastructure.

“California school districts face extremely challenging budgeting situations and any reduction in operational expenses can directly translate into money for teachers, books, or supplies,” said Dr. Shelly Morr, superintendent of SRUSD. “It is also important for our community that schools aren’t impacted by events such as power outages as this disrupts not just the school day, but parents having to leave work early or scramble to make other arrangements for their children. We’re excited to see these precedent-setting clean energy systems implemented on our school campuses.”