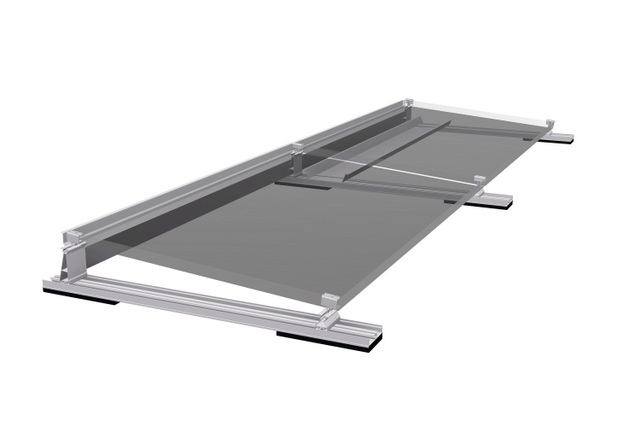 The Schletter Group is releasing a new generation of its FixGrid, a mounting system for flat roofs: The 2018 FixGrid kit system combines the benefits of the FixGrid and AluGrid systems, resulting in even more simple and faster assembly. Furthermore, the system is capable of withstanding higher wind and snow loads, making it even suitable for places exposed to extreme weather.

“Our FixGrid 2018 is a modern flat roof system that is suitable for all areas of application, while also being highly economical for the user,” Manuel Schwarzmaier, head of distribution for roof systems at Schletter, said. The faster assembly is due to a number of construction improvements, such as that the FixGrid 2018 leaves the factory with a newly developed swivel connector that can be put together without tools. At the same time, the degree of pre-fabrication has continued to increase, requiring fewer operations at the construction site. For instance, the building protection mats now come pre-attached to the base plates of the FixGrid 2018 kits. That reduces the assembly and mounting time and thus the costs per kilowatt hour of installed PV capacity.

The added flexibility of the system makes it possible to further reduce costs: Windsafe plates and ballast tubs only have to be used where they are actually needed for technical reasons. At the same time, the FixGrid 2018 is now even more durable than the previous model. The optimized geometry of the profiles has now made the system capable of withstanding very high snow loads.

New Windsafe plates, including an integrated ballast slot for the south-facing variant, allow adequate ballasting for places with higher wind loads. This makes it possible to use FixGrid 2018 almost everywhere. The ballast blocks can be easily applied to the continuous beams, ballast tubs and Windsafe panels.

The developers at Schletter continue to use a modular design for the FixGrid 2018: Almost all components, such as the Rapid16 panel clamp, are from Schletter’s standard range and are also part of other assemblies. “This has great benefits for retailers, because it avoids the expense of having to warehouse specialized parts,” Schwarzmaier explains. “This allows us to ensure high availability and shorter turnaround times.”

For the fastest possible assembly, the FixGrid 2018 comes in several kit variants that will cover the majority of applications: For east-west-oriented arrays, the Schletter Group offers kits for two or three pairs of solar panels. For elevated south-facing solutions, the system is available for two or three rows of panels. It maintains the rows as a single unit, and any configuration of panels can be realized. As a planning tool, there is the free SchletterConfigurator. The software automatically selects the ideal kits and handles structural analysis for the system, generates a ballasting plan and a parts list. As always, the systems are shipped out including a professional structural analysis, system documentation and assembly instructions.