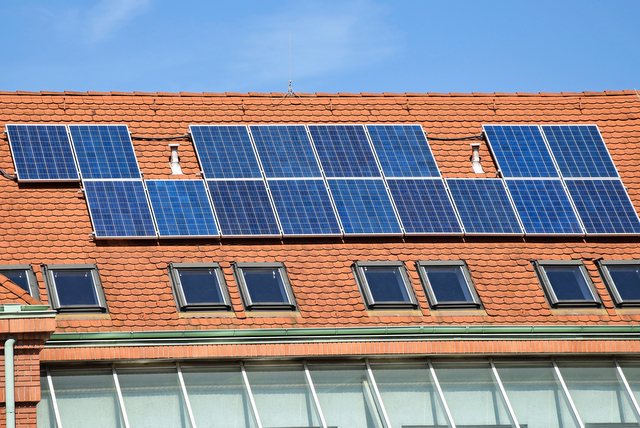 Schools and solar are a perfect match. This is no longer just a theory either, with 5,489 K-12 schools in the United States now using solar energy — a number nearly double the total solar capacity that was installed at schools in 2014, according to a major new report by The Solar Foundation, Generation 180, and the Solar Energy Industries Association (SEIA).

The report, Brighter Future: A Study on Solar in U.S. Schools, 2nd Edition, captures the accelerating trends of solar adoption in U.S. schools. As you might expect, California leads the nation in the number of solar schools by state, with 1,946 solar schools and a 489 MW capacity, followed by New Jersey, Arizona, Massachusetts and New York. Nevada has the highest adoption rate, with 23 percent of schools using solar energy statewide. Arizona has the most solar school capacity on a per capita basis, at 86 watts per student.

Nearly 4 million students in the U.S. attend schools with solar power, with a combined capacity of 910 megawatts (MW), an increase of 86 percent over 2014. The amount of electricity these schools produce annually, at 1.4 million megawatt-hours, is enough to power over 190,000 homes.

“There’s a reason solar is spreading so quickly across America’s school districts, and it’s pretty simple — when schools go solar, the entire community benefits,” said Abigail Ross Hopper, SEIA’s president and CEO. “By switching to solar energy, schools immediately see their electric bills go down, leaving more money for learning. Plus, what teacher wouldn’t want a life lesson in science and conservation right there on school grounds? It’s a win all the way around.”

At the same time that costs are going down, schools have more financing options that minimize up-front investment. In recent years, most schools have financed their solar installations through power purchase agreements (PPAs), in which a third-party finances, builds, owns, and maintains the system. This allows schools and districts to purchase solar with very little initial cost. Within the last three years, nearly 90 percent of the schools for which data is available used a PPA to install solar.

PV in schools: Education sector is one of solar’s best opportunities

In conjunction with this report, clean energy nonprofit Generation 180 is launching a national Solar Schools Campaign to mobilize parents, students, school districts, and local leaders to support the transition to solar energy in their communities. The campaign is creating volunteer teams and will leverage a detailed “how-to-guide” in the report that provides advice on how schools can muster support, assess economic feasibility, identify financing options, generate proposals, and select installers for solar energy systems.

“Many school districts need champions to help make stakeholders aware of the opportunities for going solar,” said Tish Tablan, National Organizer for Generation 180. “Our Solar Schools Campaign is designed to equip these champions with the information and tools they need. Once they see the financial, educational, and environmental benefits, we are confident that many schools will make the transition for a brighter future.”

• In Bozeman, Montana at Sacajawea Middle school, an eighth grader led a successful campaign to raise $115,000 to install solar. The funds are expected to be paid back through electricity bill savings within nine years.
• In Reno, Nevada, Washoe County School District meets 12 percent of its energy consumption from 4.2 MW of solar installations at 35 schools, which will help the district meet its 20 percent renewable energy goal by 2020.
• In New York State, Broadalbin-Perth Central School District is developing an 8,000-panel, 2 MW offsite solar array to help offset the costs of a capital improvement campaign. The installation is expected to save $5.3 million on electricity bills over 25 years.
• In Arlington, Virginia, Discovery Elementary School uses solar as part of its net-zero design that is a large part of the school’s interactive energy curriculum, saving $100,000 annually on electricity bills.
• In Bakersfield, California, Kern High School District is installing 22 MW on 27 sites, saving an estimated $80 million over 25 years.
• In Illinois, Grayslake Community High School District is meeting 36 percent of its energy consumption through rooftop solar on two high schools and a third, ground-mounted system, saving an estimated $10 million over 25 years.

You can read the full report here.