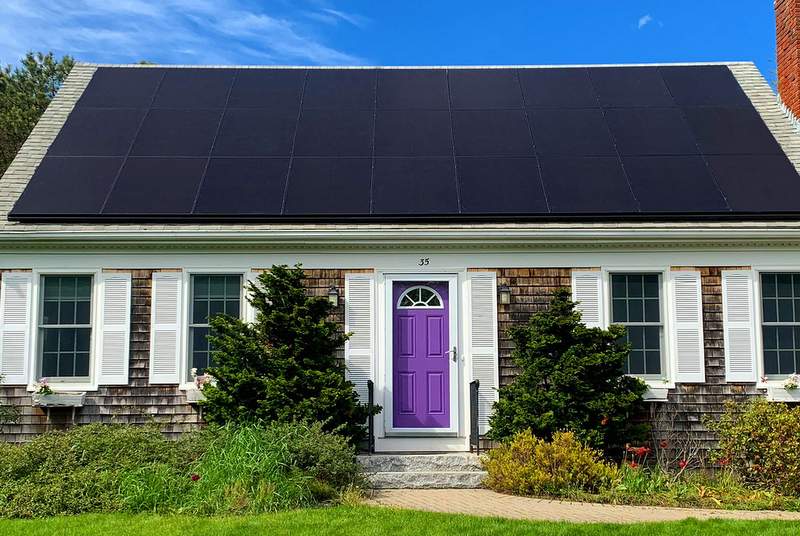 When a panel is partially shaded, irradiance on that panel is no longer uniform, which leads to a loss in power. But the way a given panel responds to shading depends on how the cells themselves are connected. When PV cells are connected to one another in series, the current that ﬂows through the string must be the same at every point.

So, when a single cell is shaded, its current and voltage (power) is reduced, which then limits the entire string to that shaded cell output. That’s obviously not great for system output, but this is also a big factor in hotspot formation that can damage PV panels. This is how just one shaded cell could wreck an entire panel.

Under normal conditions, the diodes are in the ‘OFF’ state i.e. they pass negligible current and are hence effectively not involved in the circuit. If one sub-string is shaded to such an extent that the corresponding diode becomes forward-biased, the diode will switch to the ‘ON’ state. In this state, the diode has considerably less resistance than the sub-string, and hence panel current will tend to ﬂow through the diode, bypassing the shade-affected sub-string. This greatly mitigates hot-spot risk and prevents the shaded sub- string from limiting the current from the rest of the panel.

So, better for sure, but room for improvement.

PowerXT panels are constructed by “shingling” cells — full cells are diced into strips and reconnected in a way that achieves higher panel eﬃciency. The PowerXT panels are then assembled from units of series-connected PowerXT Cells. Here’s how a panel consisting of 20 PowerXT Cells arranged in four quadrants of ﬁve cells each would be constructed. 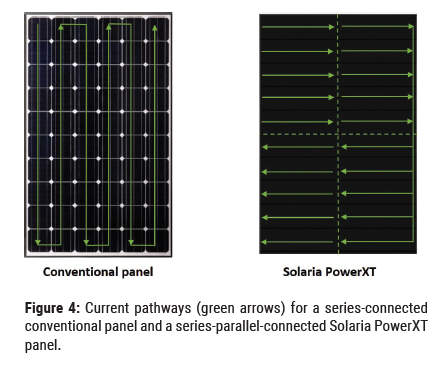 Like the sub-strings in a conventional panel, the quadrants are series-connected and ﬁtted with bypass diodes, allowing them to be bypassed if necessary. The big impact of four panel segments over three is just simple math:

But Solaria adds in another layer of protection against shading losses by the parallel connecting the ﬁve Cells within each quadrant. If a shading object were to reduce current ﬂow for one of the ﬁve Cells in a quadrant, the presence of four other current paths can help to mitigate overall power loss.

A conventional panel and a Solaria PowerXT panel are compared for some commonly encountered shading scenarios under controlled indoor laboratory conditions. Panel shading was achieved by adhering pieces of opaque material directly to the glass on the front side of the panels. The results are definitely notable: 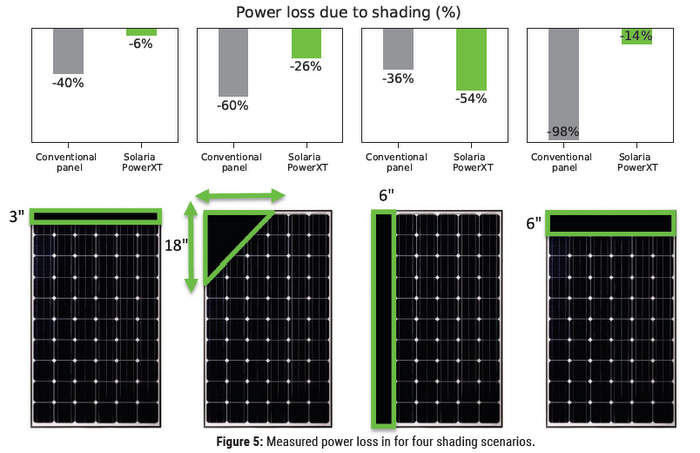 For each panel type, an 8-panel, single-string system was installed on a single south-facing mock roof with a 20° tilt. Each system was connected to an identical string inverter. Testing was performed over a 70 day period in late Summer/early Fall. A dormer-like shading object was positioned over the panels such that it created approximately 12 inches of shading on the top row of panels at solar noon on the ﬁrst day of the test.

These are impactful results, but since this shade tolerance is so unconventional, the expected performance is not factored into common PV design software tools. Solaria says they are not aware of any tools capable of capturing the shade-tolerance benefits of PowerXT panels that have laid out in this research.