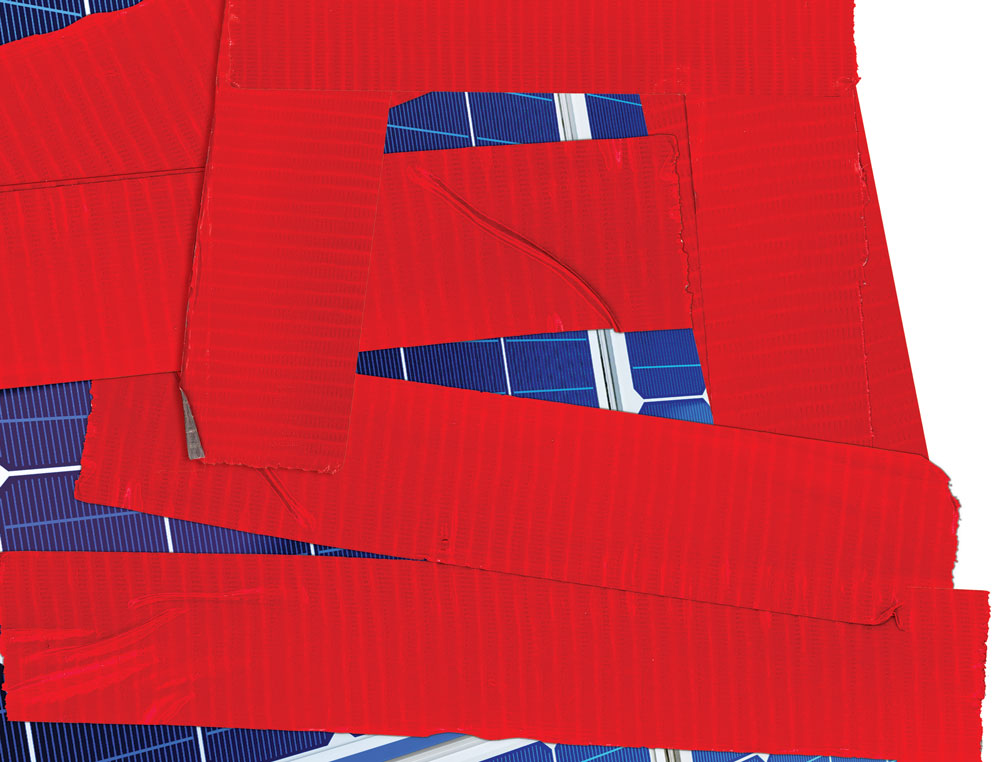 While PV technology has made considerable gains in terms of cost reduction and increased efficiency over the last decade, many authorities having jurisdiction (AHJs) around the country have not. Government often gets credit for growing the solar market through subsidies, but this ignores regulatory hurdles in the way of project completion such as old timey zoning laws, overly burdensome permitting practices and time-consuming interconnection policies. All of that sticky red tape can stifle PV growth. Certain AHJs are deemed so cumbersome, or confusing, that solar installers avoid them completely — regardless of the true long-term value of solar as a generating asset to a customer and community.

We think it’s worth asking, of the 10,000 jurisdictions out there, how many are not worth the effort, and how many viable solar projects are lost as a result?

For residential solar PV, hardware costs account for only 0.89 cents per watt of a 2.8 cent per watt system cost total. A full two-thirds of the cost of a residential solar installation are soft costs, a majority of which are unavoidable business operating expenses, such as customer acquisition (0.34 cents per watt) and overhead (0.31 cents per watt). Permitting, inspection and interconnection (PII) only made up 0.10 cents per watt, which seems kind of harmless in the bar graph relative to the non-hardware costs benchmarked in NREL’s study. But what is included in the 0.10 per watt PII cost benchmark?

“There are direct costs that are easier to quantify, like a building permit application fee, but there are opportunity costs associated with regulatory delays that are more difficult to quantify in terms of installed cost, as measured by dollars per watt,” says Kristen Ardani, a solar program lead and analyst at NREL. “For example, NREL’s cost benchmark for residential PII of 0.10 per watt mainly captures direct costs, including an assumed $400 permit fee and six hours of back office labor for building permit and interconnection application preparation and submission. It does not include the costs associated with any regulatory delay or need to submit revised applications.”

She reiterates that NREL’s PV system cost benchmark represents the national average for a typical PV system and does not necessarily reflect the cost of PV installations in jurisdictions with burdensome permitting requirements. Ardani did note more onerous jurisdictions could easily quadruple the assumptions of the PII benchmark.

“For every day a system is delayed, that’s one less day the system is producing revenue and other benefits,” she says. “Also, think of it in terms of time, delays and the cost impact of those delays.”
While less common for the residential market segment, there’s also the cost associated with projects that are stalled to a point in which they are no longer economically viable, which means more indirect costs absorbed in overhead and operating margins. You won’t necessarily find these measured in dollars per watt.

“It can be difficult to quantify the whole suite of soft costs that are perhaps better measured in terms of time and lost opportunity,” Ardani says. “While we have looked more closely at the time required for the utility interconnection process, in terms of business days, NREL has not directly quantified how PV growth is impacted by the lack of standardization in building permitting and inspection processes across more than 18,000 AHJs.”

Instead of a big invisible hand pushing the market forward, many municipalities around the country are being kept under the invisible thumb of bureaucracy. The last real study of how many jurisdictions are avoided by solar installers because of onerous permitting processes was a poll done by Clean Power Finance in 2015. At that time, the 273 residential installers (which accounted for 90 percent of the market) showed more than a third of U.S. solar installers say permitting requirements limited growth.

We looked for an update to that Clean Power Finance study and came up empty, but the anecdotal experience of solar installers is still full of head scratchers and headaches. The cities of Portland, Ore., and New York City will elicit audible groans from the solar community, and we’ve heard of many solar contractors avoiding (or charging a premium) to install in seemingly solar-friendly places like Palo Alto, Berkeley and LADWP jurisdictions in California. As a national solar and energy storage design and engineering company based in California, SepiSolar sees and hears it all, much of which boils down to overly burdensome back and forths with AHJs.

“As a general rule, Southern California is the hardest region to pull solar permits,” says SepiSolar CEO Joshua Weiner. “Lots of structural Professional Engineer [PE] work is required, even on residential projects. The Southern California area has many permitting authorities with their own, little, ad-hoc and idiosyncratic rules.”

Example: Some towns have concerns about landscaping and rooftop aesthetics. Rejecting a solar permit based on aesthetics is especially egregious in California because it is actually illegal according to California’s Solar Rights Act. But, that doesn’t stop it from happening and causing a chilling effect in certain pockets of an otherwise solar-friendly state.

“Fairfield, Calif., wouldn’t let us submit plans for a Mercedes-Benz dealership because the solar panels would be visible from the street,” Tiffany Hanson, project manager at SepiSolar says. “We had to throw the Solar Rights Acts at them, and they finally changed their zoning ordinances, but it delayed the project by two months.”

Respondents to the Clean Power Finance survey cited individual projects being subject to the permitting requirements of multiple AHJs. An average installation requires the involvement of two AHJs (including a utility), with some installers reporting up to five AHJs for a single project. This may include a utility, city and/or county planning offices, city and/or county fire departments, a state permitting agency and other AHJs as well.

“It can be difficult for installers to determine which AHJs must be consulted,” says Chelsea Barnes, director of policy services at EQ Research, a provider of policy research, analysis and data services to businesses active in renewable energy. “We often work with installers who need assistance in figuring out the various permitting requirements in a new area where they are seeking to do business. I can tell you from personal experience that you sometimes feel like you are going in circles, being passed from one agency to the next, trying to navigate what the requirements might be for a particular project.”

Delays can arise from inefficient processes and lack of clear communication between installers and AHJs, but often delays can happen due to lack of familiarity with PV technology. The EQ Research team conducted research on solar permitting practices of cities and towns in New York and Massachusetts in 2015. In both states, they report encountering situations where local permitting staff was unfamiliar with solar PV technology and could not provide clear permitting requirements for solar projects to be constructed in their jurisdictions.

“This demonstrated a clear need for training, education and outreach for local officials,” Barnes notes.

In Massachusetts and New York, EQ encountered jurisdictions that did not have an inspector on staff at all, contracting out its inspections instead, which added time. Weiner recalls one permit pulling experience in Rohnert Park, Calif., that involved a city building official who was also the city electrical inspector, plumbing inspector, assistant deputy sheriff and part-time handyman.

Needless to say, that took a while too.

“Things have probably changed over there, but the lesson here is that there are many jurisdictions in the U.S. where solar — and now energy storage — is new, and building inspectors are just getting up to speed on best practices. Rather than complain, offer to help,” he says. “Not only can you speed up your plans, but you’ll also make a friend with someone who can help streamline your permits.”

The Department of Energy began funding the SolSmart program in 2015 to help local communities address solar soft costs. One focus area of the program, which is led by The Solar Foundation and the International City/County Management Association, is to reduce friction throughout the solar permitting process. Jurisdictions interested in growing their solar market can consult the checklist of best practices set by SolSmart to achieve one of three levels of certification. In the two years since, SolSmart adoption is ahead of its target (currently at 211 municipalities and counties designated in 37 states with the end goal originally being 300).

The core issue from the SolSmart team’s vantage point, according to Zach Greene, program director at The Solar Foundation, is the lack of transparency, as many jurisdictions literally no information on what developers need to submit.

“A lot of communities don’t express what their needs are for a permitting package and because of that, a developer might not know what to submit,” Greene says. “When that happens there is a constant back and forth between permitting office and installer about forms needed and spec sheets needed or what diagrams they require. That can add a lot of time to the process, especially depending on the responsiveness of local government.”

This is why a baseline requirement for the Bronze SolSmart designation is an online checklist of requirements for the permitting process. Something that basic is a huge first step for reducing the back and forth and general uncertainty holding back business. For large-scale projects, zoning ordinances usually need to be reviewed in terms of decommissioning and the role the county needs to play. Check out some SolSmart designee success stories here.

For solar installers inching that boulder up the hill, Weiner recommends keeping good notes. “It’s really trial and error,” he says. “In other words, the best way to find out how horribly an AHJ or utility will treat you is to submit an application and just go through the process in a brute-force type of manner. Then, the second step is to keep notes of everything that goes wrong or sideways. Then the next time you encounter that jurisdiction, you’ll be prepared with the experience you gained the last time you visited that office.”

Of course, making calls to chief electrical inspectors and plan checkers to get clarity before submitting applications is great, but the right person is often hard to track down.

“Another solution is to collaborate with other installers,” Weiner says. “If it’s the first time you’ve gone to this AHJ, see if you can find another contractor or buddy who has gone through the process and get the skinny on the situation from him or her, so you don’t have to get surprised throughout the process.”