Mercom Capital Group, llc, a global clean energy communications and consulting firm, released its report on funding and mergers and acquisitions (M&A) activity for the Battery Storage, Smart Grid, and Energy Efficiency sectors for the first quarter of 2017.

Venture capital (VC) funding (including private equity and corporate venture capital) for Smart Grid companies increased threefold in Q1 2017 with $164 million in 14 deals compared to $46 million in six deals in Q4 2016. In a year-over-year (YoY) comparison, in Q1 2016 $110 million was raised in 14 deals. 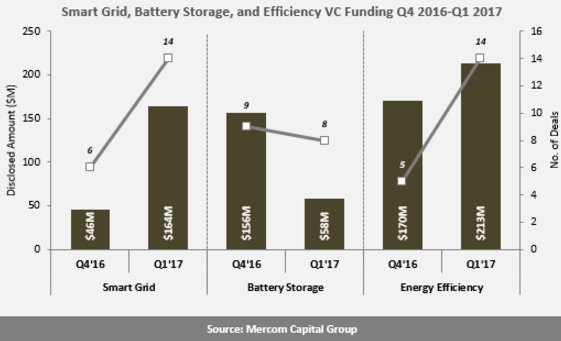 RELATED: SEIA meets with Rick Perry to talk solar innovations, storage and future of the grid

RELATED: Here’s the price of residential solar-plus-storage systems, according to DOE research

Twenty-two investors participated in VC funding this quarter. Within the sector, Efficient Home/Building companies brought in the most funding.

Debt and public market financing for Efficiency companies fell to $301 million in three deals this quarter compared to $928 million in five deals in Q4 2016.

Head here for a copy of the report.