Standard Solar Inc., a nationwide solar energy development and financing company, put in a ton of work in all phases of development to complete a 9.8-MW solar project for the City of Gallup, N.M.

“We’re excited that our unique ability to finance this project played a role in bringing it to its completion,” says Scott Wiater, president and CEO of Standard Solar. “City officials at all levels were committed to making this project a success, and it was an honor for us to be involved.”

Found in the Flood 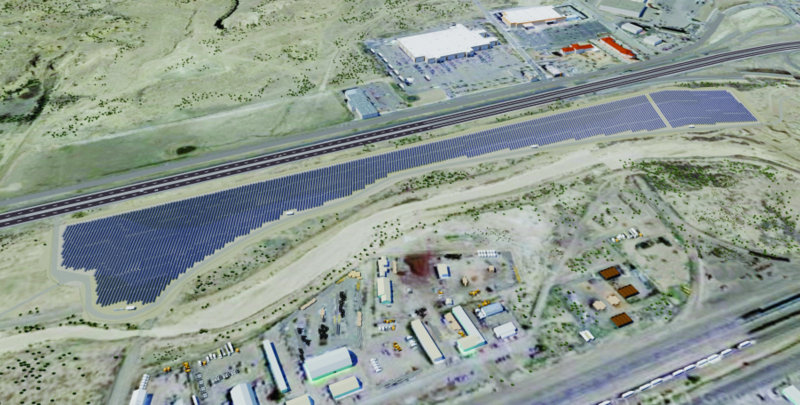 The land for this project was located in a 100-year floodplain, which meant designing a system to withstand the conditions created by a flood of that magnitude. Standard Solar found a company that could design both the racking system and the pile foundations supporting it, but in its design process, they determined the major factor contributing to the pile design shouldn’t be the base-flood elevation condition, but the wind load — and designed it accordingly.

The PV array was elevated to prevent maximum expected flood waters from reaching the PV modules and other critical electrical components. The ground clearance of the PV array, when at maximum tilt, ranges from 3 ft on the east side to 6 ft on the west side. The inverters and combiner boxes were also all installed at heights designed to exceed maximum water levels.

On the financial side, Standard Solar negotiated a power-purchase agreement that did not require any upfront cost to complete the installation of the solar power plant. Even better, the city will pay the solar firm a flat rate for the production generated by the system over 20 years.

“This array will have a huge impact on the City of Gallup and its future,” says Richard Matzke, Gallup electric director. “When the opportunity to protect our environment and save our citizens’ money presented itself, we were thrilled to take advantage. We appreciate everyone involved in the project for helping us bring it to fruition.”

The solar farm is expected to generate more than 20 million kWh of power annually saving the city approximately $785,000 and providing nearly 10 percent of the city’s energy use. The solar farm, constructed on approximately 31 acres of city-owned land south of Interstate Highway 40, will generate enough electricity to power 2,500 homes and offset production of 3,500,000 lbs of carbon dioxide annually. The project provided local employment opportunities for 58 jobs during the construction phase and two ongoing positions.

Standard Solar financed the project and will own and operate the array. Mangan Renewables, a division of Mangan Inc., developed the project in partnership with Wiser Capital and their proprietary underwriting platform.