This year’s Silver Project of the Year, the 18-MW Annapolis Renewable Energy Park, is an 80-acre monument to the virtues of civic collaboration. The project’s 54,000 solar panels will generate over 20,000 MWh of clean electricity each year (enough to power more than 12 percent of the city’s homes), generate more than $5 million in revenue for the city over the course of its 20-year lease and save taxpayers an estimated $1.7 million over that time.

And it almost never happened. 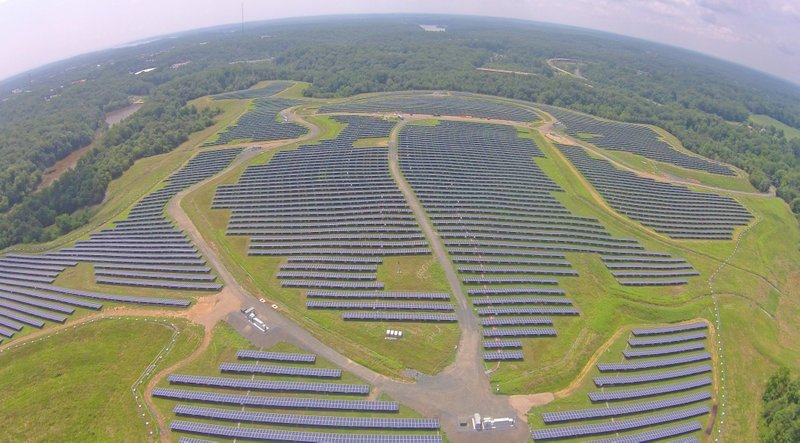 Solar projects situated on landfills are notoriously tedious to get done in terms of financing and construction, and this was no different (we will get to that) but for years the largest obstruction to progress were the two jurisdictions getting on the same page.

“The city and county working together seems so obvious, and for decades it didn’t happen,” says Steve Schuh, county executive for Anne Arundel County at the ground breaking. “The city and county maintained a relationship of either mutually ignoring each other or outright hostility.”

Thus, a project originally tabled as far back as 2009 couldn’t garner enough support to move forward. This all changed when Michael Pantelides was elected Mayor of Annapolis. Finally a partnership was formed to allow both jurisdictions to pursue projects that benefited each of their goals, stuff like environmental cleanup, improved waterways, restoring the oyster population and a focus on bringing in new jobs. The Annapolis Renewable Energy Park is a culmination of many of these goals as it is the largest landfill project in Maryland and possibly the largest in North America.

The Annapolis project is financed 100 percent by private money. Poughkeepsie, N.Y.-based BQ Energy LLC was in charge of the construction and specializes in landfill projects. The company became interested in the project when Annapolis issued a request for proposal, and BQ Energy subsequently signed a 20-year lease for the space in August 2015. The ensuing two years were all about permitting and lining up the stakeholders.

The Annapolis Renewable Energy Park is remarkable for its size and complexity. As with any landfill project, contractors had to follow strict EPA protocols and state regulations, such as needing non-penetrating racking technology to prevent damage to the site’s environmental cap. National engineering, procurement and construction firm EDF Renewables Distributed Solutions led the way on the ground. They turned to Solar FlexRack for the racking, a Youngstown, Ohio-based provider that’s become synonymous with landfill solar projects. Unable to drill piles into the landfill’s protective membrane cap, Solar FlexRack’s Series B (ballasted) Pre-Cast solar mounting technology was selected to transfer loads into the concrete block and allow for reductions in ballast thickness.

“Solar FlexRack’s expertise in this important niche market makes the company a perfect partner for landfill projects,” says Jamie Resor, CEO, EDF Renewables Distributed Solutions. “We are pleased to work with a firm that can provide the precise, high-quality product required to execute our vision for the Annapolis Renewable Energy Park.”

The seven pre-fabricated inverter stations were designed and handled to meet the size and weight restrictions. Trucks were allowed in according to a careful schedule to prevent damage to the roads and to protect the environmental cap on the landfill. Furthermore, the design allowed access to 10 methane vents on the landfill that are maintained by the city of Annapolis during the operating phase of the solar energy facility.

Upon completion, the assets were turned over to Building Energy Development U.S. LLC, a subsidiary of Italian renewable energy company Building Energy S.p.A., which will provide the money necessary to repay the loans. In the end, all these efforts converted a formerly toxic, unusable property the size of almost 60 football fields into a powerhouse supplier of clean energy that created over 100 new jobs.