The semiannual Solar Marketplace Intel Report from EnergySage shows that solar system costs continue to fall, despite the Trump tariffs, which so far, have not even produced more domestic module procurement. Here are four takeaways from this latest report, which is based on millions of transaction-level data points generated within the EnergySage Solar Marketplace during 2018.

Tariffs have no impact on domestic panel purchasing (yet) 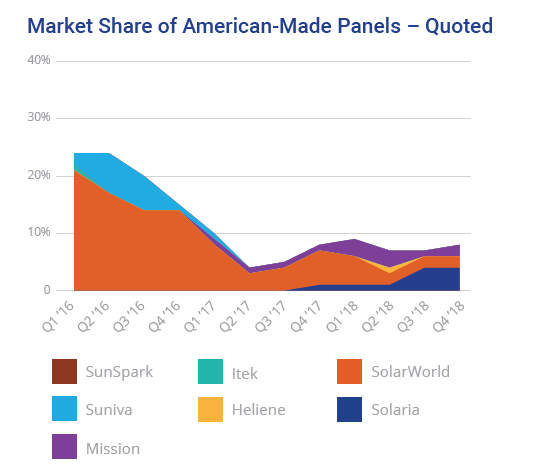 In January 2018, the Trump administration acted on the U.S. International Trade Commission’s finding of “serious injury” to U.S. solar panel manufacturers by levying tariffs on imported solar panels. The tariffs were intended to help American-made solar panels better compete with their foreign-made counterparts.

However, a full year after the tariffs were announced, the number of quotes offering domestically produced panels reached near-record lows on the Solar Marketplace. Ultimately, just 4% of EnergySage shoppers purchased a system with American-made solar panels in 2018 – an all-time low in the history of the EnergySage Marketplace.

But many of the top panel providers are opening / have opened U.S.-based manufacturing facilities, so this mix could actually shift pretty dramatically in a future report.

In the meantime, Panasonic remains the most quoted / selected solar panel brand with LG coming in second. Among the U.S. manufactured brands, Solaria is on top, followed by Mission Solar.

Cost of solar falls to $3.05 per Watt, with several markets trending under $3 per watt

In H2 2018, the average quoted cost of solar on the EnergySage Marketplace dropped 2.2% to $3.05 per Watt. This is the largest price drop seen on the Marketplace in two years. At the same time, the average size of quoted solar energy systems increased by 7%, up to 9.6 kilowatts.

Digging into this number further, the news is even better for solar in larger markets like Arizona, California and Texas, which are seeing sub $3 per watt costs regularly. In fact 45 percent of the quotes in EnergySage’s network fell below $3 per watt.

Florida is one state showing intense price competition, with an average cost per watt of $2.72. On the other end of the spectrum, the Northeast is still seeing some of the higher solar system costs in the country.

The federal Investment Tax Credit (ITC) will decline to 26% at the end of 2019, which may effectively erase a year’s worth of solar cost decreases. The installed cost of solar could increase by over $1,000 for the average residential solar shopper come January of 2020.

Solar interest grew in all 50 states

Consumer interest in solar increased across the country, with interest doubling in 11 states between 2017 to 2018, according to an analysis of EnergySage website traffic. Virginia led the nation with the most year-over-year growth in solar interest, with Nevada a close second.

“Consumer interest in solar has proven incredibly resilient over the past year, despite tariffs and other attempts by the current administration to artificially decrease demand,” said EnergySage CEO and founder Vikram Aggarwal. “Solar prices are continuing to fall as installers improve their operations, supply chain management, and sales strategies. Additionally, we expect the growing popularity of brands like Enphase, LG, Panasonic, SolarEdge, and SunPower to lure more American consumers into the residential solar market in years to come.”