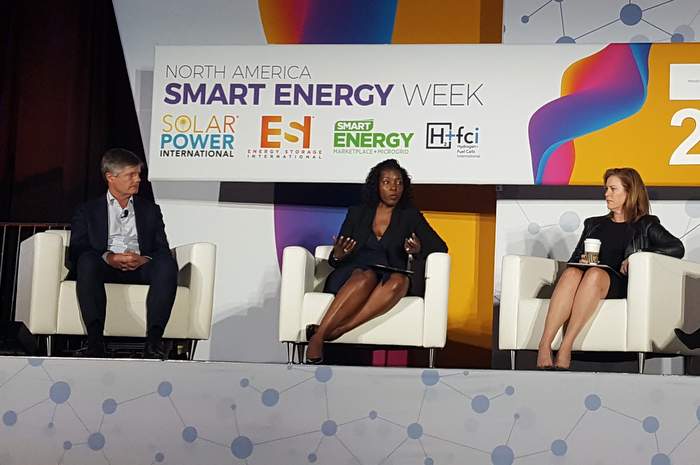 An opening panel featuring [from left to right] Brian Davis, Vice President of Energy Solutions, Shell New Energies; Paula R. Glover President & CEO, American Association of Blacks in Energy; and Political Strategist Stephanie Cutter hit on all of the key themes we picked up on at Solar Power International 2019.

Solar Power International is an untamable beast for us trade publication writers. Hundreds of exhibitors with new products and services, tracks and tracks of educational sessions and a ton of on- and off-the-record tidbits from casual conversations. Plus, beers start pouring around noon. So, yeah. I jotted down as much as I could before my notes became incoherent. Here are some of my more semi-coherent observations from this year’s Solar Power International.

Solar’s big opportunity and the volatility of political power

This isn’t exactly new, but the Solar Energy Industries Association (SEIA) and the Smart Electric Power Alliance (SEPA) seem to increase the emphasis on political progress every year. This year the focus was on the short-term objective of extending the ITC yet again with an eye on (and a plan for) a long-term objective of getting solar to be 20 percent of U.S. electricity generation by 2030.

“The Solar+ Decade represents opportunity and a paradigm shift as we transform energy use in America,” said Abigail Ross Hopper, president and CEO of SEIA. “When we hit this goal, by 2030 we will more than double our workforce and add $345 billion in private investment, all while offsetting electricity sector emissions by 35%. But we can’t get there on momentum alone. We’ll need policies, aggressive collaboration, and action from every member of the industry to make these goals a reality.”

The Solar+ decade plan is bold and, to my ears, certainly achievable, but I can’t help but feel the very first year of the decade could rip up the roadmap before we even reach the road. A lot hinges on the ITC outcome, sure: Wood MacKenzie believes an extension of the ITC would spark $87 billion in new private sector investment and add 113,000 American jobs over baseline estimates by 2030, according to 10-year forecasts. But the 2020 election results could reverberate much more. It’s hard to envision a disruptive renewable energy decade kicking off with a climate denying administration retaining the White House via popular vote — not just for the regressive actions it’ll certainly take, but also for the overall tone it sets in the public’s discourse. Too much progress was stymied and reversed the last four years to get too excited about any long-term plan until the vibes and vision of the country swings in a different direction.

Consumer demand and public opinion get mentioned a lot. The stat that 70-some percent of consumers (even Republicans!) support solar energy is a great talking point that probably even understates the public’s preference for renewable energy if said public truly understood the progress/potential of the industry at this current moment.

But how much does it really matter? I’d argue the consumer never leads any disruption or trend. Don’t we all just meander around and make decisions within the society that’s shaped around us? Don’t the big changes need to first come from the top down, backed by money and influence? I pondered these questions walking around Salt Lake City as bros on scooters whizzed up and down the streets. Do you think there was a consumer demand for motorized scooters? My guess is no. The scooters just showed up one day in front of people.

Scooters? This is weird! We all likely thought at first. These are silly and lame right? Like Segways? But there the scooters remained, day after day, as more people started trying them out. I assume soon walking on a sidewalk will be for old people and social outcasts and scooters will be touted as another case of the public pushing for something – but only after a bunch of them were dumped in our path. It’s similar to how I first made fun of colorful wacky dress socks when they popped up in stores. Now they are the only socks I own. I have made that choice, I suppose, but not until I was immersed in a world of them.

Anyway, this is an unnecessarily long way of saying the most influential news on the trade show floor this year involves larger brands and global corporations making big moves into the solar + storage world. Shell acquired Sonnen earlier this year and is making more noise about its plans in virtual power plants. Caterpillar is making a big hybrid energy push. Generac, a market leader in home backup and generators, acquired Pika and plans to put its marketing muscle and established sales channels to building the home storage market (or at least nudge it to greater prominence). Those companies join the likes of other known consumer brands like Panasonic and LG that now offer a complete solar + storage solution.

The tide feels like it’s turning. The technology and economics are certainly a big part of why this even happening, but more influential brands choosing to diversify and commit themselves to growing/owning this new category will be what tip the scales of consumer demand.

Some other solar + storage headlines from last week:

Utah’s alcohol laws are not as bad as we thought

I always thought you could only get 3.2% beer in Utah. Luckily I was mistaken. Turns out that’s just beers on tap. There were some other nuances, but you can pretty much get drunk in Utah as much as anywhere else. Good on you, Utah. 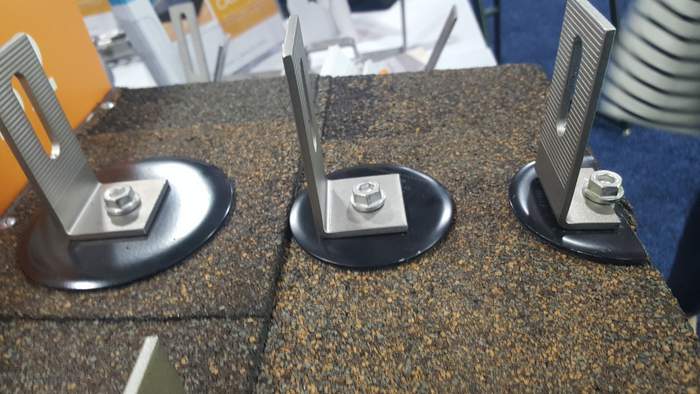 Every year I think manufacturers have trimmed as much fat from their systems as possible only to walk around the floor and see new efficiencies added in. There are just a ton of smart system designs and collaborations out there now. QuickBOLT’s low-profile Microflashing somehow got simpler (pictured above). Ecolibrium reduced aluminum in its new MetalX solution for metal roofs by 73 percent. SunModo’s SunTurf addresses three different mounting approaches at once. EcoFasten (now a part of Esdec’s family of rooftop racking brands with Quick Mount and IronRidge) debuted its ClickFit rail-based solar mounting system for composition shingle and tile pitched roofs for the first time in the U.S.

The most impactful moment of the conference might have been an anecdote shared by Paula R. Glover, President and CEO, American Association of Blacks in Energy, on the opening panel Monday night (pictured at the top of this post). Glover has been in the solar industry for 30 years, and she said early in her career she would invite colleagues to certain functions, but most wouldn’t come and wouldn’t tell her why — except one person:

You could sense the room was a bit uncomfortable hearing that story, and that’s precisely why it was important. It is no small thing to have that perspective shared from the main stage of the opening session of the largest trade show in an industry. Like a bunch of scooters dropped on the sidewalk, it helps establish the new normal, which is needed for the industry to achieve its diversity and inclusion objectives.

“When we think about diversity, it’s not a numbers game,” Glover said earlier. “People were just checking a box, and that is no longer the case. … you can’t think you’re going to hire 20 women and all of a sudden create an environment that’s friendly for them if you’ve never hired a woman before. It doesn’t work that way. And to women I say if you are the only one, you have an obligation as well to help create this culture and inform people.  … We all have to get out of our own way.”

Agreed. That goes double for the scooter bros.