On June 5, the Road to Rio+20 series made a final pit stop in Washington D.C., the North American host city for World Environment Day, to launch a new report, Advancing the Transformation to a Green Economy through Green Buildings and Resource Efficient Cities: Key Messages from North America. The series, a collaborative initiative between the U.S. Green Building Council (USGBC), the United Nations Environment Programme’s Regional Office of North America (UNEP RONA) and the World Business Council for Sustainable Development’s North American Office (WBCSD U.S., Inc.), kicked off in Toronto in October 2011 and visited six cities around the U.S. and Canada to raise awareness about Rio+20 and to engage North American stakeholders in promoting green buildings as a conduit of the green economy. Stakeholders and participants along the Road to Rio+20 identified obstacles and messages for decision makers, which were compiled into the final report.

The launch of the report featured remarks by the Director of UNEP RONA, Amy Fraenkel, who introduced the Road to Rio+20 series and our goals moving towards Rio. USGBC’s Vice President of National Policy Jason Hartke presented the findings of the report including the top five messages for decision makers: 1. improve awareness, education and training; 2. empower local action and innovation; 3. increase financial resources and remove barriers to long-term investments; 4. encourage common metrics, methodologies and tools; and 5. promote stakeholder collaboration and public-private partnerships.

Kerri-Ann Jones, assistant secretary of state for oceans and international environmental and scientific affairs, presented the state of negotiations and the U.S. position in Rio. Assistant Secretary Jones said, “Rio+20 is an important opportunity for the international community to advance sustainable and inclusive economic growth. It is an opportunity to include all players involved in sustainable development. Governments alone cannot lead the transition to a green economy.” She continued, “the green building industry is one of those places where you can do well by doing good…at Rio, green buildings and cities will get important and well deserved attention.” See Assistant Secretary Jones’ full remarks here. 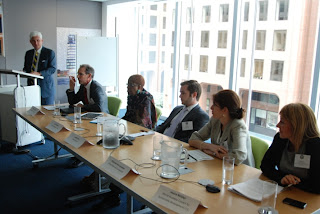 A moderated panel discussion featured experts from both the public and private sectors discussing strategies for Resource Efficient Cities including Christophe Tulou, director of District of Columbia Department of the Environment; Dr. Lilia Abron, president and CEO of PEER Consultants, P.C.; Jordan Doria, manager of stakeholder engagement at Ingersoll Rand; Richenda Van Leeuwen, senior director of the energy and climate at United Nations Foundation/Sustainable Energy for All; and Jessica McGlyn, director of WBCSD US. The United Nations Foundation’s Richenda Van Leeuwen discussed the role of buildings in achieving the Secretary General’s Sustainable Energy for All initiative, which aims to increase the share of renewables, energy efficiency and energy acess to all. Jessica McGlyn, representing the member companies of the World Business Council for Sustainable Development US, called upon leaders to remove barriers and perverse incentives which prevent the rapid and widespread uptake of green buildings.

Stakeholders along the Road to Rio have spoken. Green buildings represent a high impact, low cost path to the green economy, and this opportunity has been realized in cities throughout North America. National leaders from around the globe must address the barriers to market transformation as outlined in the report by advancing green buildings and sustainable cities at the Rio+20. 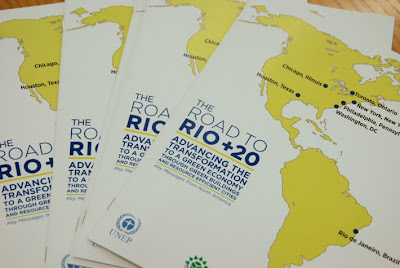