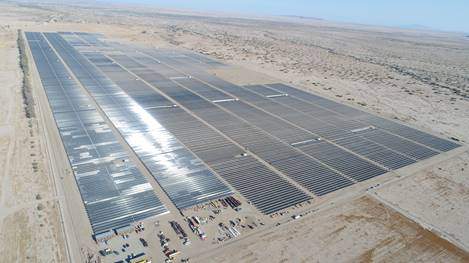 Sunpin Solar has signed a 70-MWac Power Purchase Agreement with an investment grade offtaker. The energy will be generated from Sunpin’s 98-MWdc Titan Solar 1 Power Plant in Imperial County, California.

Sunpin Solar, a California-based solar developer, announced a renewable energy power purchase agreement with an investment grade offtaker for the full output of the Titan Solar 1 Power Plant, which began construction in January 2020. The renewable energy PPA covers the full 98 megawatt direct current power capacity of the solar project and will serve to meet California’s renewable portfolio standard requirements once it has reached commercial operation at the end of this year.

Sunpin Solar’s CFO Kelly Lloyd stated “the signing of the PPA along with the tax equity investment and energy hedge commitments has propelled Titan Solar 1 into a utility scale desert solar diamond project that Sunpin is proud to develop and complete with its business partners and local community”.

The 98 megawatt direct current Titan Solar 1 Power Plant, which will be operational in November of 2020, is situated on 420 acres of land in Imperial County, California, between the Salton Sea and the Anza Borrego Desert State Park. It is interconnected to the Imperial Irrigation District Utility grid and has delivery capability into the California Independent System Operator territory. The single-axis tracking system has an expected annual production of over 214,000 megawatt hours.

This is Sunpin Solar’s second utility-scale solar project in Imperial Irrigation District, following the successful completion of operation of the 75-megawatt alternating current ColGreen North Shore project in 2018. In addition to these two projects Sunpin also has a portfolio of additional solar plus storage projects under development in Imperial Irrigation District and Imperial County.

“The project would not have moved forward as smoothly as now without the tremendous support from the Imperial Irrigation District Board of Directors and staff as well as the County of Imperial, especially under such a challenging time due to COVID-19. Sunpin is committed to generating more tax revenues, creating more jobs and bringing more local benefits to the community.” Said XJ Chen, Vice President of Development at Sunpin.

The Titan Solar 1 project created over 300 local jobs at the peak of construction, even during the COVID-19 pandemic. There has been a cohesive effort to complete the project on schedule while keeping its workers safe. The project is expected to provide annual environmental benefits through a reduction in carbon-dioxide emissions by over 150,000 tons and preserving the equivalent of 200,000 acres of U.S. forests.