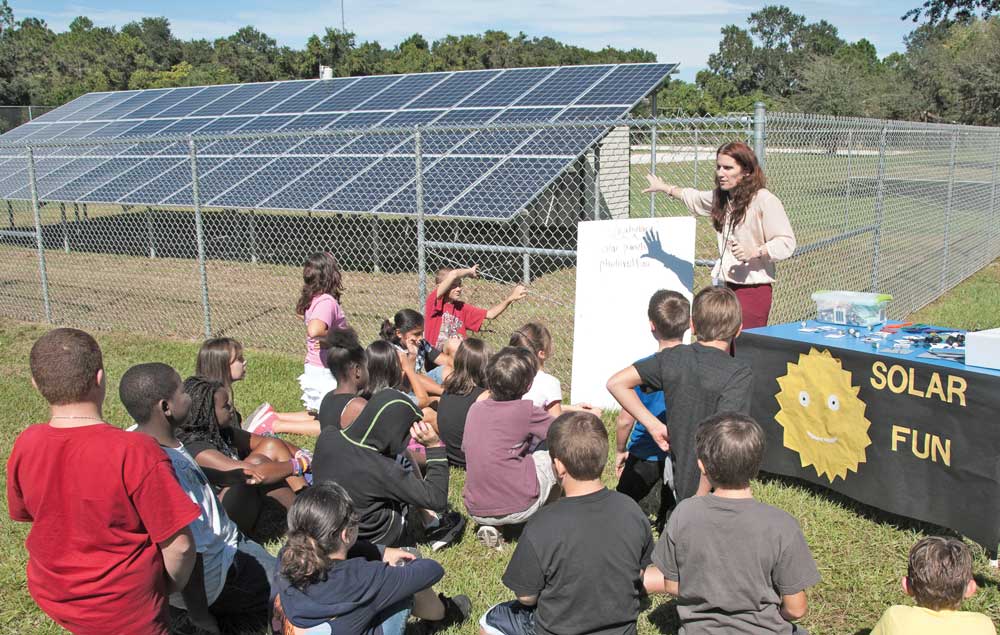 The Union of Concerned Scientists convened a group of diverse stakeholders in Chicago late last year to discuss the equitable deployment of energy storage. The participants developed a set of consensus principles for storage deployment that elevate the critical importance of community-led clean energy solutions. Listed second in those principles was improving resilience. From their report:

“2. Ensure that energy storage helps make residents and communities more resilient to both human-caused and natural disasters — which will become more frequent and severe due to climate change — by deploying local, onsite power to keep essential services operating during extended power outages and by restoring power after a disaster.”

That’s the buzzword in renewable energy now: resiliency. Resiliency means the “robustness and recovery characteristics of utility infrastructure and operations, which avoid or minimize interruptions of service during an extraordinary and hazardous event.” A resilient system is built with the understanding that random emergency outages can occur, is prepared to minimize their impact when they occur and is able to restore service quickly, while being nimble enough to improve performance in the future.

This is not the same as reliability, which remains a hallmark of the U.S. electrical grid. One could argue though that our long-term strategy to ensure reliability was a contributor to our current concerns about resilience — the large-scale centralized burning of fossil fuels contributing to global warming, which is causing more frequent extreme weather events, thus necessitating plans for more distributed renewable energy resources. Mother Nature is not without irony.

Resiliency is being cited in a ton of regulatory project plans and rule-makings. The National Association of Regulatory Utility Commissioners looked at the various instances of resiliency planning in a new report, The Value of Resilience for Distributed Energy Resources: An Overview of Current Analytical Practices. In it, NARUC reviewed the methodologies used to quantify the value of energy resilience, particularly as it relates to investments in distributed energy resources in both regulatory decision-making and non-regulatory cost-benefit analyses. The group wanted to determine if, and how, a value of resilience was calculated and applied. Some examples:

The problem NARUC discovered is there’s no real consensus as to what tangibly constitutes “resilience” and even less understanding of how it should be valued and financed (and by whom).

Valuing resiliency is difficult because discussions quickly turn into abstract existential quandaries. What’s the value to you of avoiding the potential of going without water for a week? What’s the value of a human life?

When NARUC did a comprehensive review of those proceedings mentioned above along with a bunch more, the group discovered over and over again that “resilience is not quantified or valued in a way that impacts decision making. Resilience is consistently identified as an important but intangible benefit of microgrid development. Resilience is unquantified in the formal regulatory proceedings surveyed.”

NARUC examined four specific methods they found in non-regulatory proceedings for valuing resiliency 1) contingent valuation, 2) the defensive behavior method, 3) the damage cost method and 4) input-output modeling. The report goes into serious depth on those four, but they each fell into either an economy-wide vs. bottom-up approach.

In fact, none of the methods analyzed in the report met the four specific criteria NARUC used to evaluate the resilience valuation methodologies, which were ease of use, scope of outputs, geographic scalability and power interruption duration analysis capability.

“These results highlight uncertainties as to whether the resilience provided by DER investments represents a public or private good,” the report stated. “The report finds no standardized approaches for determining a specific value of resilience when making investment decisions.”

Yes, resiliency is hard to put into a spreadsheet, but spreadsheets also seem to keep pumping carbon into the atmosphere. The good news is resiliency projects don’t have to be pure public-good charity causes. Dr. Imre Gyuk, director of energy storage research with the U.S. DOE-OE, presented two ways to solve this riddle so far on a recent Clean Energy Group webinar:

1. Pinpoint project sites with clearly identifiable revenue streams.
2. Select a suitable method to place a value on resiliency for that location.

The NARUC report suggests No. 2 is still in its infancy, but compelling resiliency projects are being built around the country using No. 1.

“Resiliency is unmonetized, so the project often needs to be justified through monetized benefits,” Gyuk said. “But resiliency, when the term is included within a project’s objectives, is often a primary reason for a project.”

Unlike other traditional backup power systems utilized in emergency situations, solar + storage assets don’t sit idle and can therefore perform grid services and cut down on electric bills.Developers, non-profits and pro-active jurisdictions are teaming up across the country to develop projects with resiliency functions at their core, but that also have multiple benefit streams to build compelling business cases.

“If you have a large load and are looking at a term longer than eight hours, you should have three systems — renewables, storage and transmission,” noted Dan Borneo, engineering program and project lead at Sandia National Laboratories. “That makes the most sense.”

As an example, Gyuk highlighted a project the Vermont Public Service Dept., the Department of Energy and Green Mountain Power collaborated on — a 4-MW/3.4-MWh storage system with 2-MW PV integrated by Dynapower on a brownfield site. The system can be islanded to provide emergency power for a resilient microgrid serving a high school or emergency center. The project’s resiliency function is to power an emergency shelter, which is obviously not usually the case. Thus, the system primarily provides its ancillary grid services functions.

The project is paying for itself via two levers of demand charge reduction. The battery is used to target annual and monthly peaks, resulting in $600,000 in savings in one year.

The pilot project has performed so well that it has generated five other storage projects, which are all now viewed as a “Vermont Storage ecosystem.” Gyuk is specifically trying to identify other locations for their storage ecosystem potential when developing solar + storage-focused microgrids to bolster resiliency, having all of them add up as pieces of a larger whole. 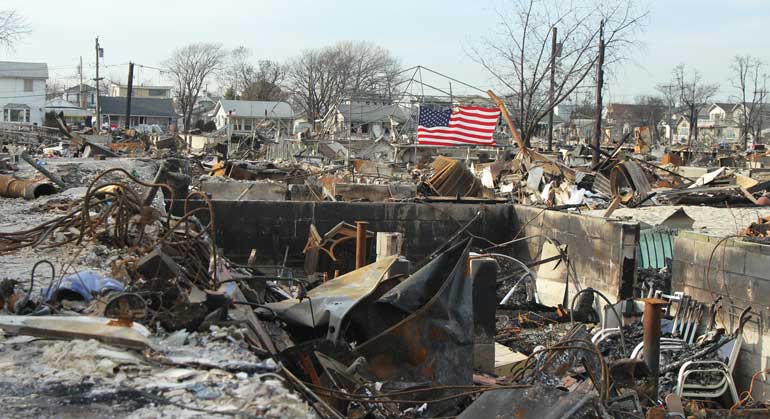 Superstorm Sandy is the most high profile example of the need for better resiliency planning and valuation strategies.

The webinar Gyuk presented on, “Oregon’s New Energy Storage Project for Resiliency and Cost Savings,” detailed the development of a solar + storage project in Eugene, Ore., that will provide backup power for emergency services, as well as cost savings and electricity services to the municipal utility, Eugene Water and Electric Board (EWEB).

As noted by EWEB’s Matt Ibaraki, the entire Northwest is overdue for a potentially devastating earthquake, and EWEB has heeded these warnings. The idea here was to construct a system that would power a water well and community shelter in the event of such an emergency. EWEB serves 90,000 users with both water and electric utility services.

“Originally we looked at all utility-owned sites, but then instead we went to distributed wells because we wanted parking and flow through to pick up water, but that brought up interesting issues concerning behind the meter projects,” he says, although later noting that utility-owned sites would be preferable when possible.

Howard Elementary School ended up being picked because of how it met the emergency planning objectives and penciled out a revenue justification by reducing the school’s demand charges.
For these sites, EWEB wanted something scalable, turning to NEC Energy Solutions for a containerized 500-kW/1,000-kWh battery energy storage system. It integrates the controls, DC medium (li ion) and the balance of plant and conversion in one outdoor enclosure.

“We wanted to get water as long as possible considering constraint on size,” Ibaraki said. “If we had peak solar during the disaster, which may be less likely, but if we had it, we could stretch it for a couple weeks, but it depends on what you’re planning for. If we lose transmission for these well pumps, we were looking at one or two weeks.”

Sandia will be monitoring the use cases to better understand the economic value of a solar + storage project that is resiliency first.

“It’s like an insurance policy,” Borneo said. “Look at it through the eyes of actuarial science, the same way you’d value a policy. It’s in the early stages. We’re now looking at the lost production costs during downtime as one way to get at it.”

This system in Oregon is a great example for one possible future predicament, but the best takeaway from all of the above is the need to define resiliency, identify its needs and risks in your area and get creative. 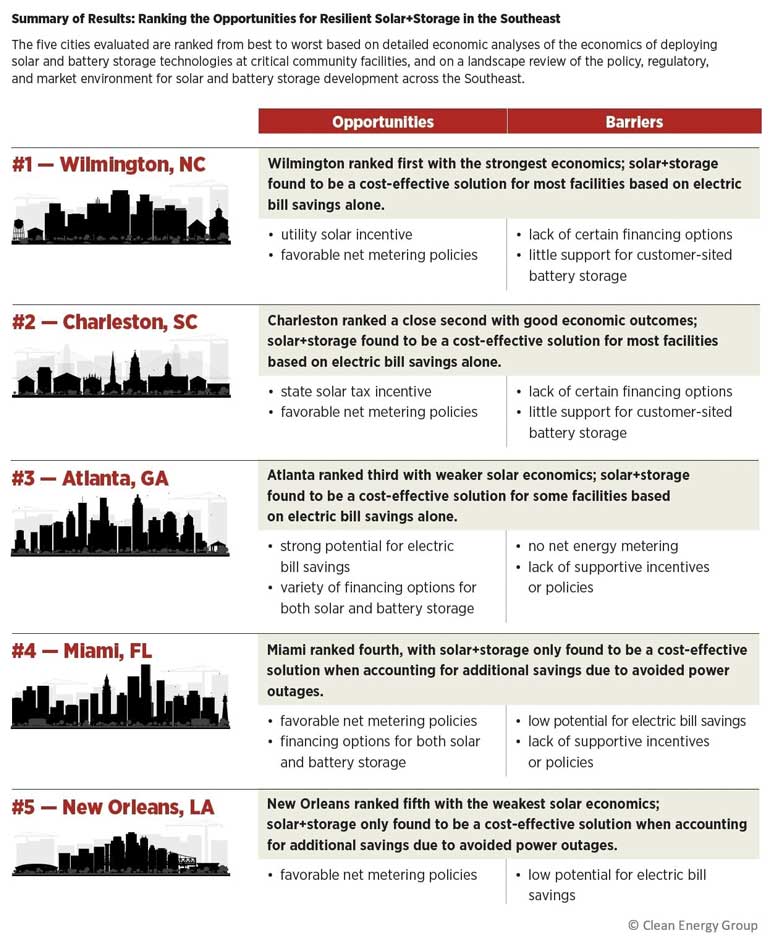 In a new report series, Resilient Southeast, Clean Energy Group asked: Does solar paired with battery storage make economic sense for strengthening the resilience of cities in the Southeast? Spoiler Alert: The answer is yes. Here is a snapshot of the five cities evaluated in the report ranked from best to worst in terms of solar + storage economics and regulatory barriers.

After reading all of these reports and listening to these webinars, I found no magic bullet, but I will conclude with what I found to be the most practical tidbit. In the Oregon case study, Robert Del Mar, senior project manager at Energy Trust of Oregon, said one of the biggest barriers to new resilient solutions that incorporate solar + storage is a lack of understanding. Engineers at a utility aren’t very likely to pursue a design that doesn’t feel 100 percent comfortable. This is why he and the Oregon Department of Energy launched an education campaign as a key organizational strategy for deploying more storage-focused microgrids. They visited utilities in Oregon and Washington to meet with engineers and discuss technical information for building and planning these facilities — digging into stuff like switch gear, nuts and bolts, sizing, single line diagrams, islanding and so on — instead of how to fund them.

“We recognize funding is a big piece of this, but it’s not what we were tackling in this workshop. We wanted to overcome technical hurdles at the small utilities because there can be a fear of batteries before you even talk about cost. We want to build confidence and excitement by expanding technical knowledge.”

This suggests that, like all good riddles, an answer is already staring us in the face. Someone smart just needs to see it and tell the rest of us.